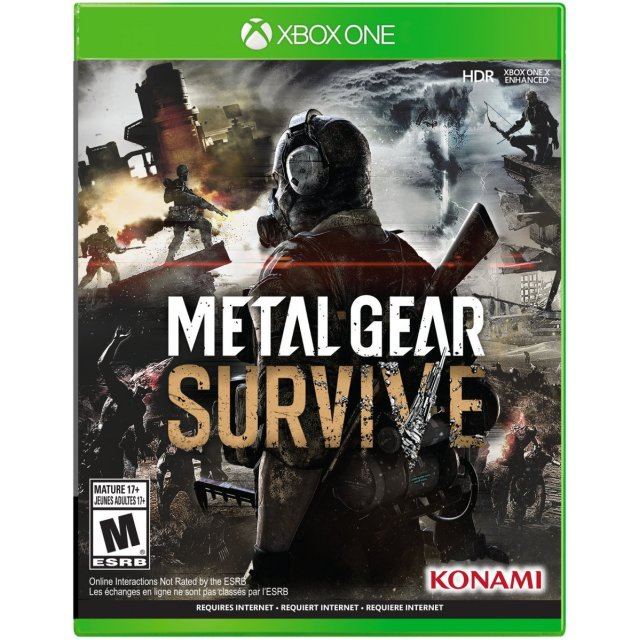 Works on all systems sold worldwide, a correct regional account may be required for online features.
1-2w Expected stock arrival within 1-2 weeks.
US$13.39
Our previous price:US$ 19.99
You save: US$ 6.60( 33% )
Manufacturer
Konami
Compatible With Xbox One™ (XONE™)
Version

Works on all systems sold worldwide, a correct regional account may be required for online features.
1-2w Expected stock arrival within 1-2 weeks
Price
US$13.39
Our previous price:
US$ 19.99
You save:
US$ 6.60( 33% )
Play-Asia.com Return & Refund Policy
Click on a thumbnail to see more pictures for Metal Gear Survive (Latam Cover)

Metal Gear Survive picks up from the ending of Metal Gear Solid V: Ground Zeroes. Players are pulled through a wormhole and find themselves in a dangerous world filled with biological threats and hostile environments where they must survive and find their way home. Not only will they fight off deadly creatures, but also explore and forage the environment for food, water, and other resources to stay alive. Scavenged materials can be used to build weapons, buildings, and other useful items, as well as develop a base camp, where crop growing and animal rearing facilities can be added. New weaponry will also be introduced to combat charging creatures and lethal environments, as well as familiar weaponry such as Walker Gears and Fulton balloons.

Metal Gear Survive continues the pedigree of Metal Gear Solid V‘s highly praised gameplay, with a unique blend of stealth and survival mechanics. Players will be able to experience both a single player campaign and co-op of up to four players. In the single-player campaign, players will learn resource management, character progression through base camp development, and craft useful weapons and equipment that can be utilized in the co-op gameplay. In co-op, players will fight with their comrades online to collect rewarding loot which can aid in the single-player campaign.

No reviews for Metal Gear Survive (Latam Cover) yet.