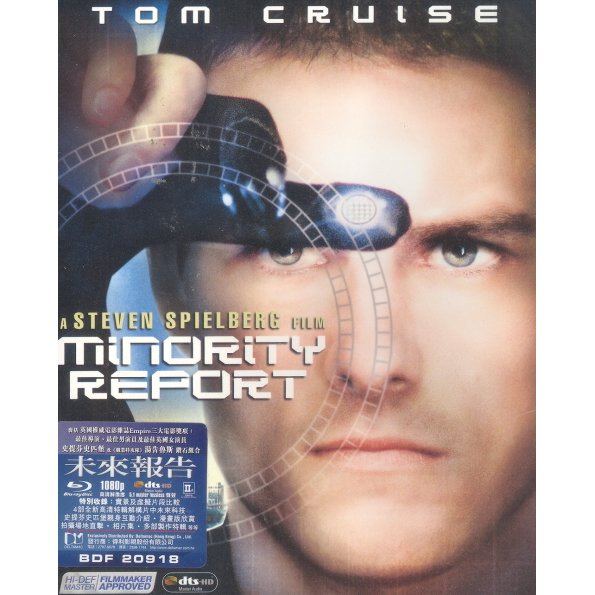 sold Out of print / Out of stock.
Please take note that, once purchased, this item must be paid immediately and cannot be cancelled or returned.
Manufacturer
Deltamac CO. LTD.
Feature
Tom Cruise, Arye Gross, Jessica Harper, Patrick Kilpatrick, Caroline Lagerfelt
Rated By Our Customers
Version

Based on a short story by the late Philip K. Dick, this science fiction-thriller reflects the writer's familiar preoccupation with themes of concealed identity and mind control. Tom Cruise stars as John Anderton, a Washington, D.C. detective in the year 2054. Anderton works for "Precrime," a special unit of the police department that arrests murderers before they have committed the actual crime. Precrime bases its work on the visions of three psychics or "precogs" whose prophecies of future events are never in error. When Anderton discovers that he has been identified as the future killer of a man he's never met, he is forced to become a fugitive from his own colleagues as he tries to uncover the mystery of the victim-to-be's identity. When he kidnaps Agatha (Samantha Morton), one of the precogs, he begins to formulate a theory about a possible frame-up from within his own department. Directed by Steven Spielberg, who hired a team of futurists to devise the film's numerous technologically advanced gadgets, Minority Report co-stars Colin Farrell, Max von Sydow, and Neal McDonough.

If you are familiar with Minority Report, why not let others know?

Very worth it buy!
visvass (45) on 19, Jun. 2010 00:09 (HKT)
Minority Report with attractive slip cover
This version is good remaster edition with attractive slip cover and exciting special features.You should have in your collection.
edupedroni (38) on 15, Jun. 2010 08:22 (HKT)
One of the best sci-fi ever
Spielberg knows how to entertain in a higher leve. The script and the effects are great. Very higly recommended.
leopoldych (20) on 02, Jun. 2010 23:37 (HKT)
Stunning work by Steven Spielberg!
Stunning work by Steven Spielberg. Elaboration of the future - until the exact details. All that is shown in the film - not even science fiction and science-based forecasts for the future. In this plot at the highest level. No goof, there is not sound, not logical action heroes, all calibrated and precisely removed. Graphics at the highest level, everything is done so that it is almost impossible to notice the lines between the real shooting and special effects. In this regard, Spielberg's films are always at the standard height.
The Blu-ray disc is made at the highest level. You'll notice a slight grain to the background, but it's a great idea Spielberg. A large number of additional materials - this is just a feast for film fans present. The disc is recommended in the collection!
PaNont (45) on 29, May. 2010 12:35 (HKT)
Audio & Subtitle Sure
For Friends

This title have Thai Audio & Thai Subtitle sure.
1 »