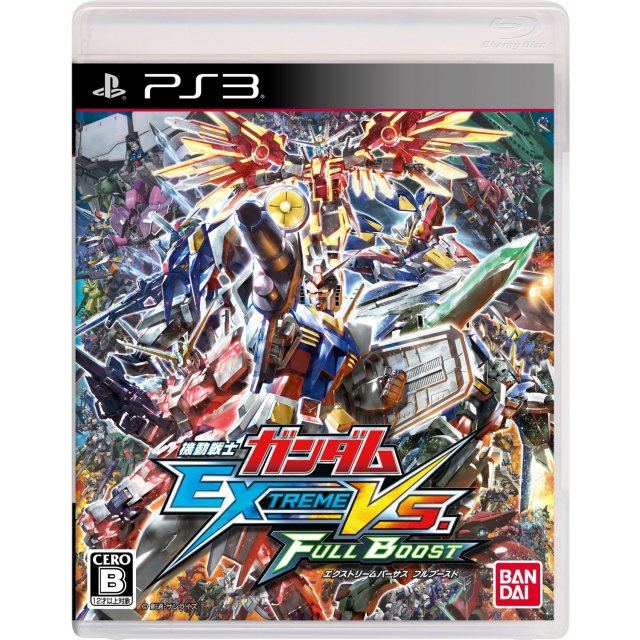 Gameplay revolves around strategically choosing asquad and sending them into battle; there are many Gundams to choose from, from vague one shot characters to famous flagship mechas from almost every series. In battle, there is the standard arcade mode faithfully representing it's source material as well as an amalgam of extra missions and content. Actual gameplay changes are the introduction of 2 important additions: the Extreme Action where players have the ability to dash-cancel attacks forchaining complex combos and the Extreme Burst, a super mode reminiscent of the original's Awakening mode. During the Extreme Burst, an ultimate attack called the Burst Attack can be used, and each mobile suit has two types of this attack to choose from.

Mobile Suit Gundam Side Stories
US$ 29.99

If you are familiar with Mobile Suit Gundam Extreme VS. Full Boost, why not let others know?

wuzzi (138) on 11, Jun. 2017 15:56 (HKT)
climax !
the climax of the series for me. combined all the best things in the series into one
MagixMan (48) on 21, Oct. 2014 19:55 (HKT)
A great Gundam game with a lot of improvement
Full Boost retains the trademark gameplay of previous installments of the Gundam Vs. series, with a few adjustments and changes. The Improvement of the Extreme Action and Burst gives players the ability to perform crazy combo's.

The graphics also got a fluent makeover. Mechs look a bit more polished in this version imo.

It's a great fighting game and a must for any (returning) Gundam fans!
chibifangirlXD (1) on 08, Jun. 2014 10:58 (HKT)
Awesome game
It's really fun me and my boyfriend are so into it
Antics (1) on 15, Apr. 2014 01:37 (HKT)
Great game
Really fun game. The huge roster and fighting mechanics makes this game's replayability really high. Not to mention the online play. Which is what this game is meant for.

Playing with another friend offline has some noticeable slowdown issues. Also, I'm not sure if it's my PS3 or the game, but the game tends to freeze for a quarter of a second whenever a friend signs in and out of PSN when playing in Free Mode. It's not very noticeable and it doesn't ruin the experience of the game in anyway. Just a slight hiccup I thought I'd point out.
johanna.pajuniemi (1) on 28, Mar. 2014 06:07 (HKT)
Best Gundam game so far
If you want to pilot your favorite Gundam(s), this game is for you! Definitely recommending this one.
1 »