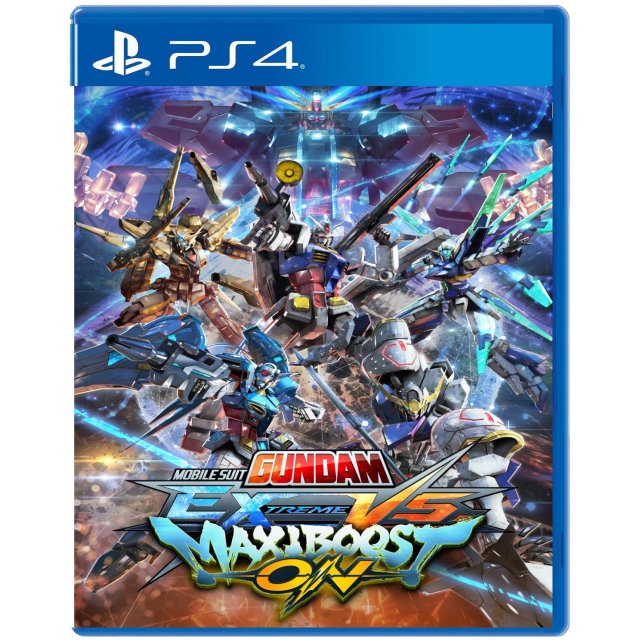 Works on all systems sold worldwide, a correct regional account may be required for online features.
24h In stock, usually ships within 24hrs. (Only 2 left in stock.)
US$59.99
Limited time offer - Secure yours now before the offer expires!

Manufacturer
Bandai Namco Games
24h In stock, usually ships within 24hrs
(Only 2 left in stock.)
Price
US$59.99
Our previous price:
US$ 71.99
You save:
US$ 12.00( 17% )
Play-Asia.com Return & Refund Policy
Click on a thumbnail to see more pictures for Mobile Suit Gundam: Extreme VS. MaxiBoost ON (Chinese Subs)

The two-on-two team battle action game features the 183 Mobile Suits that appeared in the arcade version from across 36 Gundam works, including:

If you are familiar with Mobile Suit Gundam: Extreme VS. MaxiBoost ON (Chinese Subs), why not let others know?

[This review is based on another version of this product]
Joe (12) on 11, Sep. 2020 17:19 (HKT)
Gundam fighto ! Ready .. Go !
i played this game in Japan before it is released to console. we used to play it 3 hours minimum. it is challenging and the multi player is amazing. having it on consoles is a great add and the number of Gundams are just WoW. very recommend it for a different experience of a 3d fighting game
[This review is based on another version of this product]
evaunit2005 (1) on 05, Sep. 2020 01:30 (HKT)
Super fun gameplay
Over 180 mobile suits and quite a bit of single player options is already impressive. But online and Offline multiplayer has been a blast with friends and randoms. Incredible replayability and lots of things to unlock like operator outfits, titles, title backgrounds, alliance icons and more. Easily my favorite game of this year and highly recommendable.