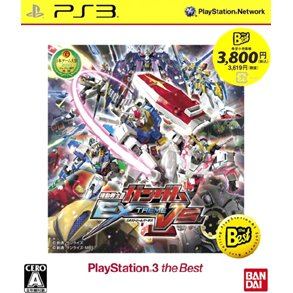 Get up close and personal, it's no longer about politics, intrigues or strategies, it's all about gun powder, laser daggers and muscles. The newest installment in the Gundam VS series is ported from the arcades to the PlayStation3. Now gamers who live miles away from the arcades can feel the adrenaline pumping through their veins as they clash swords with other Gundam pilots from around the world. The new version comes with new game modes and gamers can personalize their battlefields by using the BGM Edit Mode to play their favorite tracks in the game. Mechas from the oldest Gundam to the newest UC are all in the stable, get ready for the battle of the decade.

If you are familiar with Mobile Suit Gundam: Extreme VS (Playstation 3 the Best), why not let others know?

gato26 (83) on 23, Jan. 2017 05:31 (HKT)
Your own digital gundam collection in a game.
This game have many gundams for battle. I got it for a nice price, so it is worth it.
jhaw82 (21) on 01, Sep. 2015 11:13 (HKT)
Good game
So many gundam from so many series fight each other.
A must play game for gundam fans
sonorityoflife (38) on 05, Jul. 2015 21:45 (HKT)
Amazing roster and simple enough game controls
I bought this without much expectation other than the positive reviews I've read. I was surprised by the number of mobile suits to choose from, and of all the theme song inclusions for each of the featured series, not to mention the voice overs!

Really fun to play, either alone or in multiplayer mode!
localriot (21) on 31, Dec. 2013 12:48 (HKT)
Epic!
Gundam Extreme VS is a masterful fighting game for fans and non-fans alike. If you're looking for a fighter unlike the Soul Caliburs or Tekkens of the world, I cannot recommend this title enough. While it is most likely never coming to the West, it has very little Japanese and can be played on any PS3 system worldwide. So import away.
mecharuva (1) on 27, Jun. 2013 11:31 (HKT)
The Best Yet
I've played every Gundam Versus game available on Playstation 2 and PSP, and this is, hands down, the best Versus title yet.
1 »