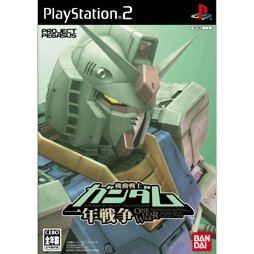 Mobile Suit Gundam: One Year War is the first game in Bandai and Namco's Project Pegasus series. You play through missions as the character Amro Ray. The game has three different types of missions. In the first mode, players utilize of non-Gundam equipment during these missions, such as gun turrets and other types of weaponry. Ground missions allow players to jump, dash, take cover behind buildings and fight under water. Space missions give players more freedom in terms of movement. While playing space missions, players are able to land and walk on ships, like fighting in ground combat.TVアニメ、そして劇場三部作で描かれた『一年戦争』。そのほとんど全てを20以上のミッションに凝縮！ガンダム一年戦争の名場面の数々が、体感アクションゲームとなって鮮やかに甦る！バンダイとナムコが持つ優れたノウハウを融合させた最強のガンダムゲームが遂に誕生！

If you are familiar with Mobile Suit Gundam: One Year War, why not let others know?

ru_oja (1) on 21, Aug. 2014 08:35 (HKT)
No title
How like a dream As for this game for so long not disappointed. Very impressed with the shipping.
[This review is based on another version of this product]
dajdavis (5) on 31, Aug. 2009 23:28 (HKT)
Good Game
I am not a person that usually plays gundam games but I really liked this one. Easy controls, good missions(2 difficulty levels each), and the added easter egg of being able to select mutiple mobil suit types after completing both difficulties. A good game for fans and players alike
ryuhoshu (1) on 20, Dec. 2006 05:18 (HKT)
The best One Year War Game for the PS2
If you like mechs, specially Gundam, this is the game for you, I\'m a huge Gundam fan and I think that I have played almost every Gundam game out there but I have to admit that some of them are not quite what you\'d expect but as soon as I played the first stage of this game I was hooked right away, the graphics are excellent, just look at the models on the gallery to see the amount of detail that they have, the control is great the mobile suits have a very realistic movement, and the extra stages were you use the gun turrets of the White Base or the soldier in first person view against the invasion of Ramba Ral to the White Base, over all it\'s a great purchase if you like Gundam and if you don\'t like Gundam you should also check it out.
jerrycatlover (6) on 12, Apr. 2006 22:45 (HKT)
It\'s too difficult to make a perfect gundam game.
I\'m a huge fan of Gundam. I almost own all of the PS2 gundam games. Well, I would say this game is better than I thought. It is very difficult to make a good gundam games which allow you to control the gundam as cool as in the anime.
Although this game is quite short, it includes most of the story events. The graphic is not bad plus the original music soundtrack. It\'s a good collectable game. With this price, it\'s difficult to say no.
Shuri (2) on 04, Feb. 2006 07:16 (HKT)
Great game for the price
I got this game not expecting much, since I never watched any gundam anime, and I was surprised! It\'s pretty fun; the graphics are pretty colorful, nice explosions. the missions are pretty varied too. A good B grade shooter! Great impusle buy for mech fans
1 »