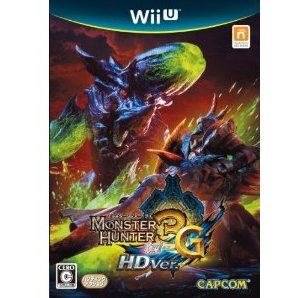 Collections
Capcom
Rated
By Our Customers
Compatible with Wii U™ (Wii U™)
For JPN/Asian systems only.

The monsters are powered up, the gates to the hunting grounds is being stormed apart by even more monsters and hunters. Monster Hunter 3G is one of the first games to come to the Nintendo Wii U. Every scene is in HD, so watch for the glint from the dragons' every scale and feel the force of their snarls. Gamers can transfer their data from their 3DS games to the Wii U to carry on their hunt at home. Turn on the network functions of the console to connect with your team of hunters. You can also connect with people who are on the hunt on their 3DS with your Wii U. Each Wii U can connect with up to three 3DS consoles with the local communication function.

If you are familiar with Monster Hunter 3 G HD Ver., why not let others know?

biorock4891 (83) on 29, Jun. 2015 09:02 (HKT)
3G still great!
MH3G still holds up I really like playing it I still go back to it when ever I'm not playing MH4G. I think its still worth owning and as fan its a must.
[This review is based on another version of this product]
kaz2009 (14) on 10, Apr. 2015 22:47 (HKT)
A great Monster Hunter game
This game was my entry into the series. I played it first on Wii U and decided to have it for 3DS too. It is quite challenging and it gets hard the deeper you progress into the game. The monsters are cool designs and the soundtrack is catchy at times. Awesome game! Great experience!
picco.cuile (10) on 03, Feb. 2015 07:59 (HKT)
Great game
I have ordered this game since the price dropped to a insane level, and overall experience is good. Just one thing is kind of disappointing is the nintendo club code is expired by the time I got the game. Since it's not really a big deal for me, so I wouldn't bother that much. Again, recommend this game.
matt986 (132) on 09, Jul. 2014 02:57 (HKT)
Good game
Arrived fairly quickly, requires a Japanese Wii U to play. And some knowledge if the language.

Not much else to say besides it's Monster Hunter, yall know what to do by now.
[This review is based on another version of this product]
gogo (6) on 25, Feb. 2013 00:13 (HKT)
No title
The most complete third generation Monster Hunter game, which includes all 12 weapons, customisable lower screen, underwater combat and G-rank! There's really not much more you can ask for. The only monsters missing are(I think): Amatsumagatsuchi, Dosfango and the two Tigrex species.

The controls take some time getting used to due to the different positions of the d-pad and analog stick of the 3DS, compared to the PSP. However, the target camera more than makes up for it, by essentially removing the need to manually adjust the camera with the d-pad!

A must buy, especially for people like me, who missed the Tri experience!