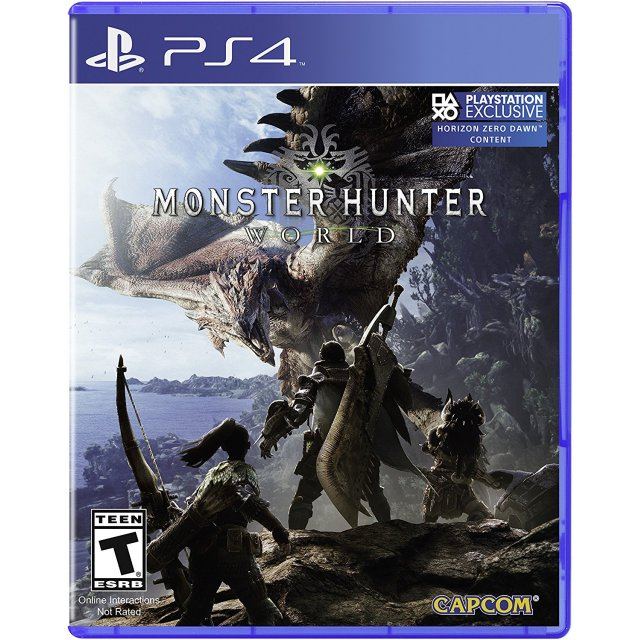 Works on all systems sold worldwide, a correct regional account may be required for online features.
24h In stock, usually ships within 24hrs.
US$21.99
Our previous price:US$ 46.99
You save: US$ 25.00( 53% )
Manufacturer
Capcom
Compatible With PlayStation 4™ (PS4™)
Version

Works on all systems sold worldwide, a correct regional account may be required for online features.
24h In stock, usually ships within 24hrs
Price
US$21.99
Our previous price:
US$ 46.99
You save:
US$ 25.00( 53% )
Play-Asia.com Return & Refund Policy
Click on a thumbnail to see more pictures for Monster Hunter: World

The latest entry in the critically acclaimed 40 million unit selling action RPG series, Monster Hunter: World introduces a living, breathing ecosystem in which players take on the role of a hunter that seeks and slays ferocious beasts in heart-pounding battles. Venture on quests alone or with up to three other hunters in a newly designed online drop-in multiplayer system which allows cross-region cooperative play between Japan and the West, uniting the global player base for the first time ever.

Monster Hunter: World sees players gear up to venture on quests to battle against fearsome monsters, progressively improving their hunting abilities as they play. Loot collected from fallen foes can be used to create new equipment and armor upgrades as players seamlessly move across map areas that comprise the living ecosystems. The landscape and its diverse inhabitants play a critical role as players strategically use the surrounding environment to their advantage. Hunters must use their cunning and abilities to survive the intense and evolving fights as they battle to become the ultimate hunter!

If you are familiar with Monster Hunter: World, why not let others know?

SKULLFANG (136) on 02, Mar. 2018 17:14 (HKT)
The greatest mhw game ever
Love this game so far. Enjoying every bit that capcom has to offered in mhw. The greatest mhw game to date.
jackshinobi.23 (1) on 28, Feb. 2018 19:58 (HKT)
Really Great for New Comers, But too easy for Veteran Hunters.
Finally, seeing Monster Hunter on console again since MH3U is really great. But, the initial monsters are a joke. I think Capcom buffed the gameplay and nerfed new monsters so to attract new players and it worked pretty well. For the veterans, We NEED MORE MONSTERS! BRING BACK RAJANG CAPCOM!