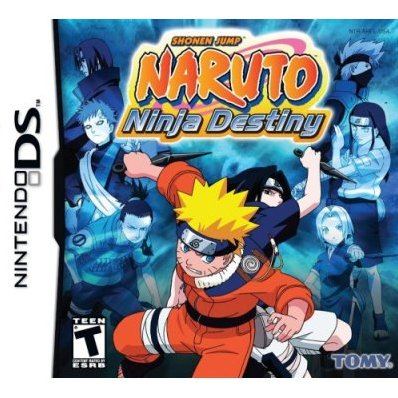 The hit Cartoon Network series, Naruto, comes to the portable 3-D fighting arena featuring impressive graphics, fast-paced action, and wireless multiplayer. Battle your way to the top with the #1 hyper-active, knucklehead ninja and all of his friends in this incredible 3-D fighter for the Nintendo DS!

If you are familiar with Naruto: Ninja Destiny, why not let others know?

kkentb (165) on 10, Apr. 2012 11:12 (HKT)
fantastic
great narutogame in nintendo
[This review is based on another version of this product]
xictor (37) on 05, Nov. 2009 02:16 (HKT)
Great Naruto game
excellent first Naruto fighting game 3d. Great gameplay and good speed in battle. Recommended for most fans.
Hidan (5) on 12, Apr. 2009 02:34 (HKT)
ninja destiny 2 (shippuden) is confirmed!
This was a good start for a naruto DS game, you get 13+ characters including Orichimaru, Jiraya, and Tsunade! I'd give it an 8.4 for good graphics, better and faster because of the U.S. with a little juice added to the game play. But I heard that TOMY is making an ninja destiny 2 and I think that they would make it an heck of a lot better with an longer adventure mode (including the sasuke retrival arc. to the shippuden arc.). I would want them to add more characters, like the europeon version did, with Asuma, Kenuri, Ten Ten, Kiba, Ino, Hinata, Kankuro, Shino, choji, the sound five (added for the first time), the five hokages, Iruka, granny chiyo, old sasori, also 2 attacks for each character, a tag team mode would also be incredible! I just want TOMY to make a bigger, and better game next time....
karuchira (1) on 20, May. 2008 08:09 (HKT)
No title
I pretty much breezed through story mode,so I gave it 4 stars instead of 5.There are 16 playable characters.
Naruto,Sakura,Sasuke(chunin exam outfit),Kakashi,Lee, Neji, Gaara, Temari, Gai, Tsunade, Jiriaya, Orochimaru, Itachi,Kyuubi Naruto, and CS2 Sasuke are the playable characters.
[This review is based on another version of this product]
gaara1394 (5) on 30, Mar. 2008 23:29 (HKT)
well....
It was fun for some time, but than it got EXTEAMLY boring, the graphics DO NOT have naruto game standards, and i think it was a waste of money, i wouldnt recommened this game to anyone, sorry
1 »