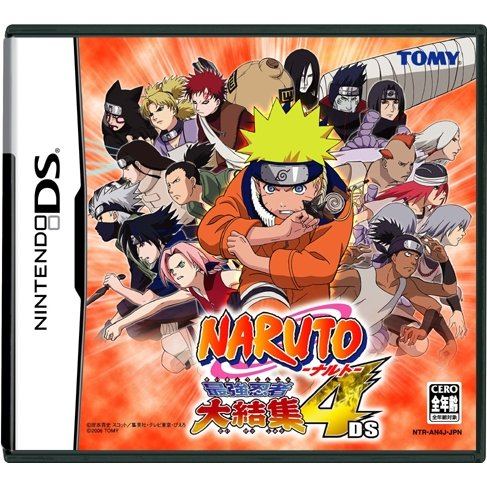 Tomy
Rated
By Our Customers
Compatible with Nintendo DS™ (NDS™)

Works on all systems sold worldwide, a correct regional account may be required for online features.
24h In stock, usually ships within 24hrs. (Only 1 left in stock.)
US$23.89
Limited time offer - Secure yours now before the offer expires!

Works on all systems sold worldwide, a correct regional account may be required for online features.
24h In stock, usually ships within 24hrs
(Only 1 left in stock.)
Price
US$23.89
Our previous price:
US$ 39.99
You save:
US$ 16.10( 40% )
Play-Asia.com Return & Refund Policy
Click on a thumbnail to see more pictures for Naruto: Saikyo Ninja Daikesshu 4

Naruto, Sasuke and other Ninjas of the Konohana clan return in Tomy's action packed Naruto: Saikyo Ninja Daikesshu sequel for Nintendo DS™. The fourth installment in total and the second one on Nintendo DS™ promises to be bigger and better than any of the previous ones. The game features a total of more than 30 characters from the anime, new moves (such as an Air Attack, Throw Action, Rising Attack and Super Jump), a new Chakra control system, new missions and up to 4 player game play.

If you are familiar with Naruto: Saikyo Ninja Daikesshu 4, why not let others know?

xictor (37) on 25, Oct. 2009 02:43 (HKT)
genial Naruto
very good game from the first season of Naruto. Good music and graphics. Recommended.
Hidan (5) on 19, Sep. 2008 11:01 (HKT)
Good at first, boring at last, but still a COOL game!
A GREAT game for smashing and fighting bosses and completing challenging missions! But the graphics weren't that good, ninja council 6 had awsome right in your face graphics!!! But this game doesn't, you also get board of it quick!!! But the good thing is that you get like 30 characters to choose from, including the sound ninja five!!! The techniques are COOL, but I recommand getting a cooler shippuden game!!! But if your a naruto part 1 fan, you would love this game!!! I am still trying to sell this game though... it is hard to sell man!
gaara1394 (5) on 16, Mar. 2008 21:39 (HKT)
Pretty good
its a really good game, but now that shippuden is out, nobody will even think about getting this game. I played a 20 something hours in like 5 months because the story mode was short and there was no free vs mode, which i was kinda upset about and there was no wi-fi battle system
georgyporgy00 (2) on 15, Aug. 2007 03:16 (HKT)
its awesome
anyone thats a naruto fan must get even if u r not a naruto fan it\'s a must have
wbentley3 (2) on 13, Jun. 2007 03:57 (HKT)
average game at best
the game isnt bad but it isnt good if you dont like the anime you probaly wont like it save your money and buy a better ds game unless you just really have the spare cash that doesent matter what you spend it on good amound of charcters but missions are stupid only fun when you acually have a boss to fight.
1 »