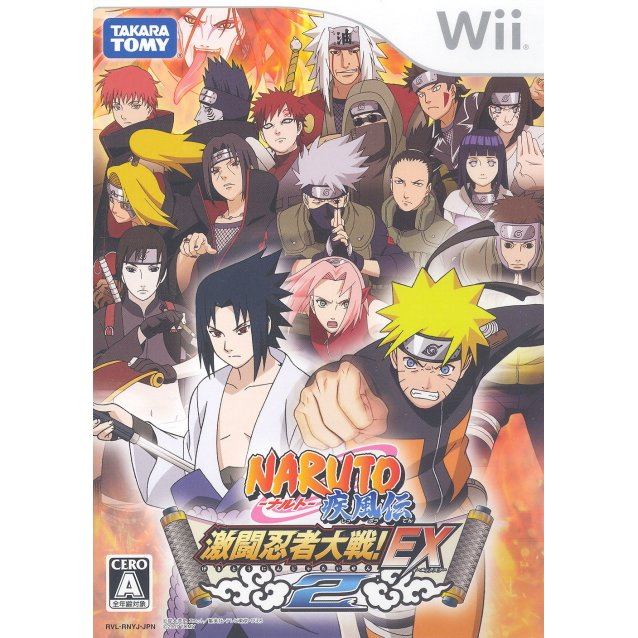 Collections
TakaraTomy
Rated
By Our Customers
Compatible with Nintendo™ Wii (Wii™)
For JPN/Asian systems only.

sold Out of print / Out of stock.
Manufacturer
TakaraTomy
Rated By Our Customers
Compatible With Nintendo™ Wii (Wii™)
Version

Naruto Shippuden: Gekitou Ninja Taisen EX 2 is the sixth installment of the popular Naruto Ninja Taisen (aka. Clash of Ninja) series. This is the first Naruto Shippuden game to feature time-skip Sasuke Uchiha as a playable character. New characters include Sasuke Uchiha, Sai, Yamato, and the return of others like Tsunade, Orochimaru, and Jiraiya. Characters such as Hinata Hyuuga, Kiba Inuzuka, Shino Aburame, Chouji Akimichi, Shikamaru Nara and Asuma Sarutobi will be returning in their time-skip forms.Two new features, "Danger Zones" and a hand seal function are included in the game. The first, "Danger Zones", are hazards on stages that can hurt the player's character when encountered (for example, spikes on cliff walls). The second feature included is a new hand seal mechanism, which can be used by the player to raise their character's attack power or health.

If you are familiar with Naruto Shippuuden: Gekitou Ninja Taisen EX 2, why not let others know?

[This review is based on another version of this product]
Fara0n444 (170) on 16, Jun. 2013 12:32 (HKT)
Believe it!!!
A great sequel, and the last Naruto game for the Americas and for the GameCube as far as I know.
It is far from perfect and nowadays with all the other great Naruto games out there for all the different consoles this game is pretty much obsolete, but if you like to revive history, or maybe just want to do a Jutsu on the GameCube, this is the one to choose!
I never played this particular version but as I played the first one and the Wii versions I just wanted to give it a try.
I don't regret it.
Total reccommendation, believe it!!!!!!
Shadowsoffate (5) on 04, Mar. 2010 09:40 (HKT)
No title
excellent game, I enjoy playing it and so do my mates :)
naruto_shippuden_ (1) on 15, Oct. 2009 17:47 (HKT)
great game
i likead this game its the best game i ever played
keyblademaster_021 (4) on 26, Oct. 2008 03:43 (HKT)
naruto
game 2 easy, especially since i know how 2 read japenese. fun game
ninetailednaruto1 (7) on 24, Sep. 2008 05:20 (HKT)
great but could be better
this game is great everything about it is beautiful but the only bad things is 1 not to many characters but thats not so bad but 2 how you unlock I suppose this is a challange but you need to do like 90 battles just to unlock the first character and up to 500 matches to unlock everyone/ everything but I suppose like I said before it is a challange great game must buy for any Naruto fan and owner of a wii (4 stars)
1 »