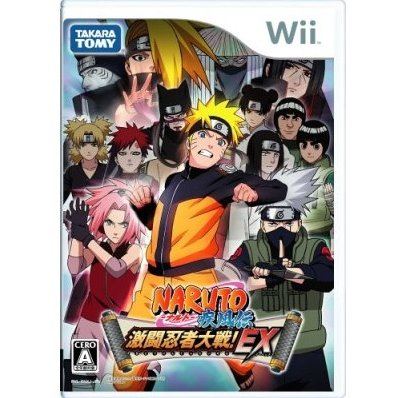 Get ready for Naruto Shippuuden: Gekitou Ninja Taisen EX for Wii, a head-to-head fighting game based on the popular anime series. The game is based on episodes from the hit anime series Shonen Jump Naruto and includes characters that have never been featured in the Ninja Taisen game series. The game takes advantage of the Wii Remote in fast-paced ninja action for up to four players in nine different gameplay modes.The next generation in Naruto games includes all-new character animations, new special attack animations and for the first time new interactive environments. Naruto Shippuuden: Gekitou Ninja Taisen EX takes advantage of the Wii system by allowing players to launch attacks with the Wii Remote using Ninja-like movements, and features special mini-games created exclusively for use with the Wii Remote.

If you are familiar with Naruto Shippuuden: Gekitou Ninja Taisen EX, why not let others know?

The weak points: few characters, easy missions and get all of the game. Lags in fights with 4 players too.
[This review is based on another version of this product]
nokiadude (299) on 07, Mar. 2011 04:09 (HKT)
salute
salute to naruto.
Solty (105) on 27, Nov. 2007 06:21 (HKT)
just wanted to clear something up
this game was still being developed whilst the ending of naruto the first series was airing etc

How can they make a story about a show that the anime watchers haven\'t seen yet, and don\'t say the manga, they pretty much had no choice but to go a little off to actually allow the anime to air before they start spoiling the non manga naruto readers

aka the casual viewer of shippuden

just realise its the first in a long to come series of Wii games, the first game is typically not as good as the rest but the rest sorta improve
smiley948 (2) on 17, Sep. 2007 12:07 (HKT)
A Must Have for Naruto Fans
great game, i love, hopefully they fix the problems for ex2
kathyweathers (14) on 02, Sep. 2007 06:53 (HKT)
A Freakin Sweet Games
This Game is soooooooo cool one of the best games I ever played on my wii I can\'t wait for the second one thats really gonna be cool.
1 »