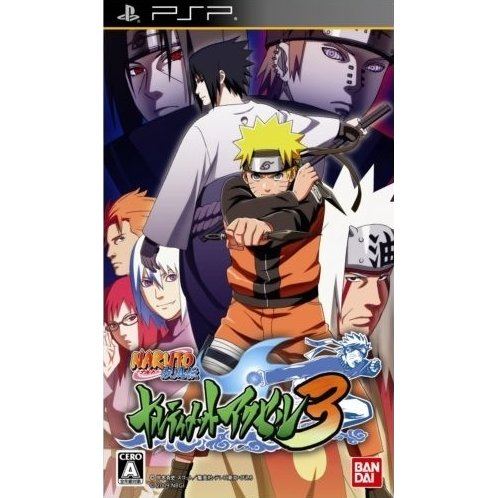 Great Game
While I will admit Accel 3 does have some shortcomings, mainly dealing with the ougi's(such as Sasori's), and the removal of throws, the game itself is very good. Even though it's on a new system people who have played the previous Narutimate Hero games will easily find themselves getting the hang of the new controls. The ...[read more...]

It's been 2 years since a Naruto fighter was last developed for the PSP. To reward fans' patience, the newest Accel game has more characters, skills, an improved battle system and an online mode that could involve a maximum of 4 players.A total of 50 ninjas have signed up for the fight, including the members of Sasuke's "Serpent" organization and the undead combi from the mysterious Akatsuki.The protagonists from the special episode "Kakashi gaiden" are also making an appearance. Minato, Obito and the young Kakashi become playable characters.Pit against your friend or play alone, the game is just as fun. There are original storylines and scenarios written especially for the single player mode, come slip into the shoes of your favourite ninja.

If you are familiar with Naruto Shippuuden: Narutimate Accel 3, why not let others know?

CC2, however, made many changes that just don't execute well. Those expecting this to play like the excellent Naruto Shippuden Narutimate Accel 2 for PS2 will be disappointed however.
chinmaya_in (4) on 02, May. 2011 19:42 (HKT)
New evolved dimension for Naruto
The game is all about more characters(New ones) including Sage Mode Jiraiya,Pain , Konan ,kabutomaru; More jutsu's kirin, sage art, paths of pain;
More ougis- with exclusive to every character of series

So why wait rather try having a ad-hoc party
link30337 (1) on 12, May. 2010 10:31 (HKT)
Excellent Game
I received mine last week and i still haven't been able to put it down. Theres a ton of stuff to unlock. The graphics are absolutely beautiful for PSP. Any fan of Naruto with a PSP should pick this up. I can't wait to see what CC2 follows up with next.
Diz-san (18) on 06, Mar. 2010 17:32 (HKT)
Accel 3 on PSP
A new Accel arrives on the PSP with a new game system that allows you to battle against up to 3 more player at the same time, great graphics on the PSP, sound is nice but some times you can't hear the voices over the sound effects,
votello (4) on 23, Feb. 2010 11:00 (HKT)
Top-Rated naruto video game
Great game, great assortment of peronajes, much variety of jutsu, until filling has
1 »