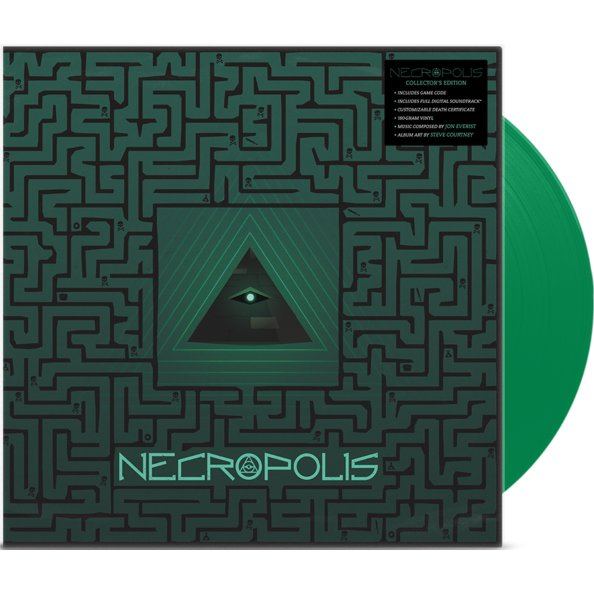 Soundtrack - composed by Jon Everist (Shadowrun: Dragonfall, Shadow Run: Hong Kong, BattleTech) and pressed onto 180-Gram transparent vinyl. As with all iam8bit music releases, this collection is mastered specifically for optimal vinyl audio quality. The full soundtrack will also be available to each purchaser via digital download, with redemption codes sent via email.

Album Art - designed by Steve Courtney, this unique cover pays homage to the punishing, maze-like architecture of the game. In addition to its engrossing artwork, the jacket features an embossed logo and a die-cut Brazen Head pupil that reveals a pop of fluorescent color beneath (on the sleeve).

Pen-and-Paper Dungeon Crawler - The album art doubles as a classic D&D-style game, including an instruction sheet and player piece. Players beware - it’s nearly impossible to navigate the maze without dying, but those who do will revel in the hard won bragging rights of success.

NECROPOLIS Game Code - A digital download code for the full-version of NECROPOLIS on your choice of platform is included with every vinyl order (STEAM, PS4, Xbox One). Codes will be distributed via email in advance of the game's release date.

No reviews for Necropolis Original Soundtrack yet.