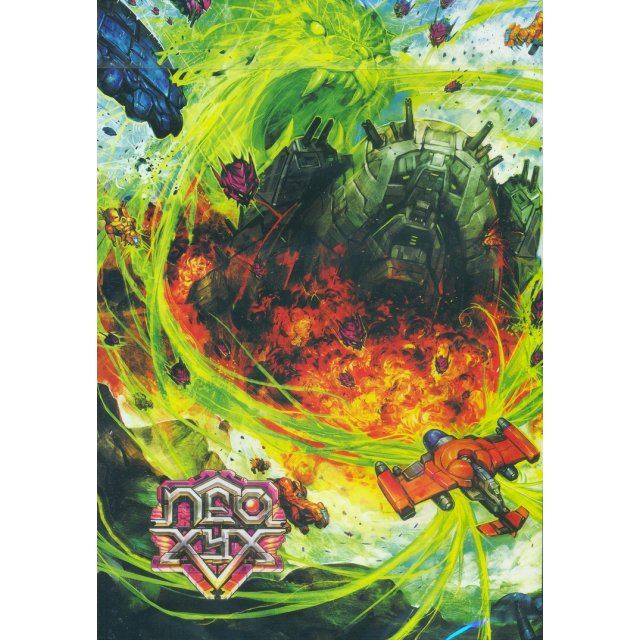 sold Out of print / Out of stock.
Manufacturer
NG:DEV.TEAM
Compatible With Dreamcast™ (DC™)
Version


Click on a thumbnail to see more pictures for Neo XYX

NEO XYX is a self-described TATE maniac shooter that takes the basics of the shooter genre and executes them incredibly well. Players will only have their regular shot (that can be modified), screen-clearing bombs (that have to be collected in parts), and a button you can hold to slow your movement at their disposal. The rest is up to you.

NEO XYX will make players put in the effort if they plan on taking on completing the game and its old school difficulty style, because if you lose all your continues you'll start all the way back at the very beginning of the game.

The developers, NG:DEV.TEAM, were even awesome enough to add multiple screen orientations for players to choose from: Arcade (true tate/vertical), Horizontal (rotated controls and HUD), and Vertical (vertical in portrait).

With incredibly aggressive AI, and a Cave-like way of forcing the player to switch their strategy up NEO XYX is a perfect addition to our growing collection of modern DreamCast titles.

If you are familiar with Neo XYX, why not let others know?

wladimiir (5) on 30, Apr. 2014 16:42 (HKT)
Amazingly intense!! One of the best Shmup on Dreamcast!!!
This game is a real bomb!! The action is amazingly intense without slowdown and the graphics are highly colored! The gameplay is immediate... a pure happiness!!
This is pure retrospirit for fans of 90s spirit games!
A HUGE THANK YOU TO THE NG:DEV.TEAM!!
blacksunblackmoon (5) on 15, Mar. 2014 22:51 (HKT)
Just buy it!!!!
I am not as learnt in the History or finer points of the Shmup genre as others here but I know this...Neo XYX belongs in your collection!!! It is like Truxton became an bullect hell game but for the DC so no blowing into cartridges!!! The action is intense, the music takes you back, and the Graphics are nice in the 16 bit vein (though I rather they look more SNK arcade than SEGA Genesis). In the end if this were the arcade days I would be popping in quarters without a second thought! Total Fun worth the Cost!!!! Once again BUY IT!!!!!
stuckintheinbetween (34) on 10, Mar. 2014 04:15 (HKT)
NGDevTeam's Best Dreamcast Game Alongside Gunlord
NGDevTeam continues to improve with its Neo Geo/Dreamcast independent game releases. Showing characteristics of a danmaku shmup, though not quite one of them, Neo XYX is a shmup in the vein of Cave games like Mushi Futari, DoDonPachi, Espgaluda, etc. Fast-paced, incredibly challenging, and most importantly, fun, Neo XYX is an absolute must-have Dreamcast game and a nice new addition to the console's software library.