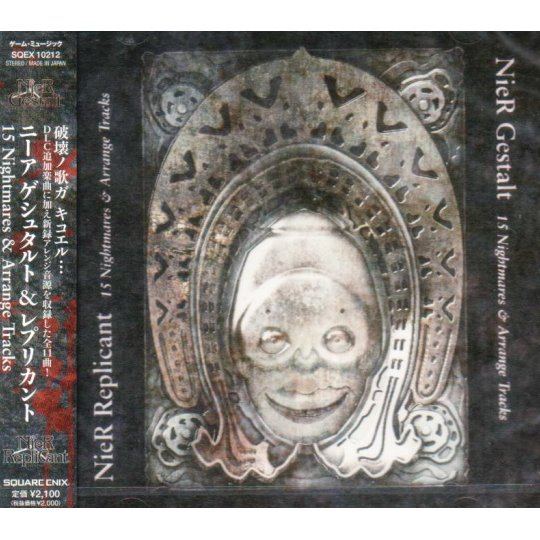 Square Enix
Rated
By Our Customers

Nier Replicant and Gestalt are like fraternal twins, they deal with the same theme, fight the same evil forces but feature completely different character relationships.This pair of dark RPGs shares the same grand, gothic soundtrack, and now, for those who haven't been able to grab the Nightmare tracks from the download contents, put this CD into your collection.And aside from the new tracks, the music director Okabe Keiichi rearranged existing music on the original soundtrack, come hear how different instruments bring a new feel to familiar pieces.

If you are familiar with Nier Gestalt & Replicant / 15 Nightmares & Arrange Tracks, why not let others know?

Choppington (3) on 19, Dec. 2011 13:19 (HKT)
Oh Man-
I've been adoring the Nier soundtrack from the moment I started until I completed the game, Finally got my hands on this album and I love everything, I didn't think they could make me love the music any more then I already do.
Nier is just my favourite OST of all time, no competition.
Bronco (21) on 05, Aug. 2011 18:08 (HKT)
Amazing
One of the greatest soundtracks of all time
amg_q8_ (1) on 31, Mar. 2011 21:56 (HKT)
Simply amazing
Really amazing, best soundtrack nearly equal to final fantasy soundtrack. Have to buy
cwt812 (3) on 05, Mar. 2011 12:24 (HKT)
Sublime
Wonderful arrangements with fantastic beats. The remixed music, while vastly different from the original soundtrack, still blended well in the game.
napa63 (92) on 23, Feb. 2011 02:45 (HKT)
Great!
New versions of songs from the game. The original soundtrack was beautiful, in these new versions, the pace is faster, and change various instruments and voices to match the action of the DLC.

The perfect complement to the game, buy it!.
1 »