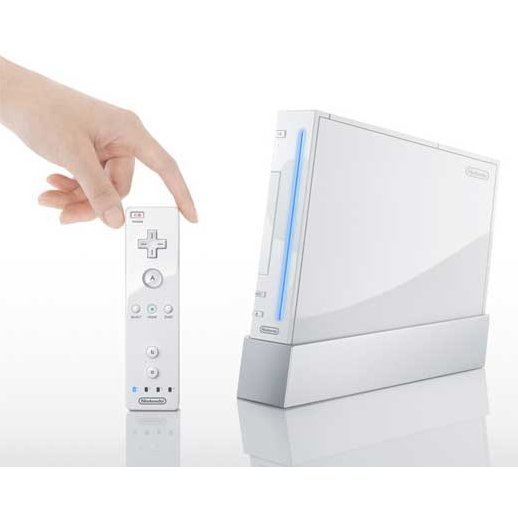 If you are familiar with Nintendo Wii (for Japanese games only) (White), why not let others know?

arcadiazer0 (9) on 12, Sep. 2010 23:25 (HKT)
Very Nice
I received my Wii a few days ago and I love it! If you have an American Wii you will know some of the options but if you do not know an American Wii it shouldn't be too hard to navigate. The Wii is packaged very nice so you don't have to worry about damages as well.
One last thing: I found out from Nintendo of America that ALL American accessories for the Wiis work, such as using a US ac adapter to play the Japanese Wii without the use of a voltage transformer is ok.
varun.ranger (38) on 04, May. 2010 12:13 (HKT)
very childish
buy this if you have a child, dont buy if you are older than 13, the games suck and its just so childish and immature.
Altered (6) on 09, Oct. 2009 22:45 (HKT)
Great console, but..
I was really happy to receive this along with a copy of Brawl. Possibly the happiest game-related moment of my life. Sadly, the Console died on me just about over a year worth of usage. Nontheless, it's a great console, with it's game library expanding constantly.
dkf82 (53) on 11, Sep. 2009 21:51 (HKT)
this is simple just perfect console
i never thought that the Wii was sooo fun to play,i got this awesome console 1 month ago,i was sooo happy when i finally got this,i ordered the japanese version cause i wanted to play some japanese games that wont b released in USA,i think there is no difference between both versions appart from Region Lock stuff,japanese ver NTSC/J,USA version is NTSC/US b careful wen buy games :p

the design of the Wii is really well done,this compact and modern design makes people love it so much,the Wii is really light,we have two USB ports to connect LAN adapter for internet connection,Wii comes with WiFii if u have wireless internet,one of the great things is that Wii have bw compatibility for GameCube,have 4 ports so u can plug ur GameCube controllers,2 ports for gamecube memory cards,play GameCube games,and one port for SD cards so u can store saved games or Wiiware,WiiChannels,Virtual Consoles games etc....

the wiimote is one of the greatest things,this control is very versatile,u can use wiimote has weapon like gun,the B button becomes the trigger,also has sword,steering wheel in Mario Kart,and have many other uses if u play Wii Sports Resort

this console is a must have for gamers,casual gamers and for the family too,im really impressed how fun the Wii could b,really awesome system

this is an amazing system with far more on the wii shopping channel then available on the north american wii~ Its so nice to be able to play games in japanese~ I am very happy with my new japanese wii~ thank you~:)
1 »