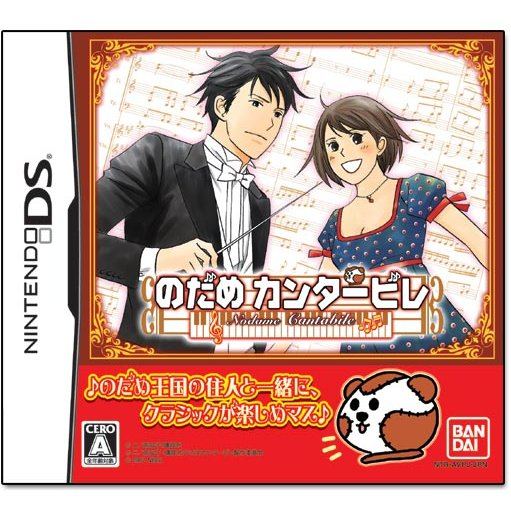 Works on all systems sold worldwide, a correct regional account may be required for online features.
24h In stock, usually ships within 24hrs.
US$17.79
Our previous price:US$ 38.99
You save: US$ 21.20( 54% )
Manufacturer
Bandai Entertainment
Rated By Our Customers
Compatible With Nintendo DS™ (NDS™)
Version

Works on all systems sold worldwide, a correct regional account may be required for online features.
24h In stock, usually ships within 24hrs
Price
US$17.79
Our previous price:
US$ 38.99
You save:
US$ 21.20( 54% )
Play-Asia.com Return & Refund Policy
Trustpilot
Trustpilot
Click on a thumbnail to see more pictures for Nodame Cantabile

Based on the manga series, Nodame Cantabile is a music/rhythm game where you lead a group of misfit musicians in an orchestra. You use the stylus to tap the screen in beat with the song, playing the part of the conductor Chiaki. The game features classical pieces from the anime series, as well as the Puri Gorota March!Nodame Cantabile has likely been inspired by Nintendo's popular Nintendo DS™ Ouendan/Elite Beat Agents series. You have the scene playing out on the top screen and you hit moving notes on the bottom screen.

Kaitou Wario the Seven / Wario: Master of Disguise
US$ 24.99

If you are familiar with Nodame Cantabile, why not let others know?

Even though gameplaying is short, it gives you lots of time to spend those mini games and information about the world of the classical music! (darn it's in japan but nevertheless).

First I thought this game is only like cheap-version-of-Ouendan-game but when I started to play and saw the other minigames and other stuff which is contain...oh wow! It's so---Nodame Cantabile spirited!!
gambrinus (2) on 05, Mar. 2008 00:52 (HKT)
Pretty Good
This is a fun game. You'll probably get more out of it if you've seen the series, but I played it before I watched it and it was still fun. The main gameplay is a rhythm game that's very similar to Ouendan, although much simpler. Some of the later pieces get fast and furious, but it doesn't get anywhere close to how hard Ouendan is. There's also a lot of other minigames included, such as a mini version of Taiko no Tatsujin. You'll complete the story mode very quickly, but there's a lot of unlockables. Language-wise, it's pretty difficult if you want to understand the plot, but it shouldn't be a problem if you just want to play the game.

Recommended for the price, for sure. Fans of the furious Ouendan pace might be a little dissapointed by how easy it is, though. On the other hand, anyone who couldn't keep up with Ouendan (or didn't like the music) might find this game more their pace.
Lettuces (36) on 22, Feb. 2008 23:41 (HKT)
GET IT IF YOU LOVE NODAME CANTABILE.
Definitely a must have for the Nodame Cantabile fan. There's even a Purigorota mini game. (The very one Nodame was playing in ep 23/24 of the anime series)

The gameplay is, as mentioned before, a collection of mini-games all of which can be easily completed by anybody with a sense of rhythm.

Be sure to check out the Anime and Manga series as well ;)
1 »