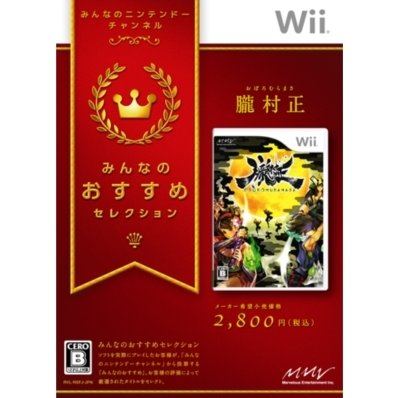 Marvelous
Rated
By Our Customers
Compatible with Nintendo™ Wii (Wii™)
For JPN/Asian systems only.

The world is full of demonic swords, once unsheathed, blood must be spilled. No matter how holy it has been, once the weapons is tainted with the hatred in blood, the sword will acquire demonic powers and lead its wielder down a path of doom.The action adventure's stage is set in Genroku and the land is under the rule of the Tokugawa shoguns. Demons are running rampant and amidst the chaos, the demon sword Muramasa has shown its face. Choose one of the wielders, the ninja Kisuke or the princess Momoe and see if you can escape your gloomy destiny.Plug the nunchaku into the Wii remote control, use the classic controller or game cube controller, game play is intuitive and easy to learn such that you could turn from novice to master swordsman in no time.

Tales of Symphonia: Ratatosk no Kishi (Minna no Susume Selection)
US$ 24.99

If you are familiar with Oboro Muramasa (Minna no Susume Selection), why not let others know?

biorock4891 (83) on 28, Feb. 2012 02:09 (HKT)
Beautiful Game
The art stlye is such a sight to see very well done the game is just amazing.
brawl (4) on 12, Aug. 2011 23:29 (HKT)
It's just beautiful!!!! I've just started playing, but it looks a really good game!!!
LightningX9 (4) on 14, May. 2011 03:31 (HKT)
Must Buy!
I originally had the US version but i just had to get the Japan version.
-Beautiful Music
-Beautiful Graphics
-Great Story
A must buy for any Japan FAN !!
game (63) on 27, Feb. 2011 03:09 (HKT)
Its Own Game
I originally picked this game up because I had played and enjoyed Odin Sphere. But after fully experiencing this game, it really took on a life of its own rather than just being "the game after Odin Sphere". I am not saying they are completely different games, but what I mean is I liked each game for different reasons. Odin Sphere I liked more for the overall experience of the game, the story, characters, and so on. With Oboro Muramasa, I definitely enjoyed the visual presentation over the story.

They games are indeed similar, especially in terms of gameplay. Just like Odin Sphere, Muramasa is an action side-scroller. I only played on the normal difficulty, which I was mostly able to clear with button mashing, but it seems that the harder difficulties require more strategy and tactical moves. Regardless, I thoroughly enjoyed the battle system. There are a few slight differences between Odin Sphere. The stages are no longer circles, but instead each area is connected in a chain-like fashion. So for example, if you want to get from one end of an area, you have to travel the whole chain (unlike in Odin Sphere where you can select each circular stage individually). There is a teleporting system in place, but there still is some backtracking involved. Of course that's not a bad thing, there's a lot to see in this game.

Just like Odin Sphere, this game has also been heavily praised for it's graphical presentation. And just like I said with Odin Sphere, Muramasa's praise was also well deserved. This game is pretty. The characters are of course attractively designed and the backgrounds are almost like paper cutouts. And some of boss designs are just amazing. They really went out of their way to add every single detail to these characters. And probably the most visually attractive part of this game was the food. It sounds a little strange, but its true. Throughout the game you encounter shops that sell food which have recover health or add status effects. Very standard. But they actually go as far as to delicately illustrate each food item and animate it being consumed in different stages. So when you buy daifuku, it shows each individual piece, then after a bite, and so on. Yes, it is completely unnecessary because these are essentially just items, but it really does add to the art style of the game. I actually got really hungry when I played this game.

The story on the other hand wasn't quite as memorable as Odin Sphere (and no, not because I was preoccupied with the food). I don't really actually remember the story line too much. I think that the ratio of story-telling to gameplay makes the story sort of fall into the background, which is good or bad depending on each person's taste. But each cutscene was just as beautifully designed and well acted as in Odin Sphere.

The music was very fitting for the game and I found myself wanting to go back and listen to certain songs. The voice acting also really helped bring the characters into reality, but I was a little disappointed that Kawasumi Ayako was not a main character.

I probably made a few too many comparisons to Odin Sphere and should have just looked at this game through open eyes, but it was hard to do knowing where this game was coming from. Regardless, I still think I would have given it a positive reception either way. The game's visual style and presentation is probably one of the best I've seen, and while some may think of that as trivial, the gameplay itself is really solid too. It may be a little simple and repetitive, but definitely enjoyable.
larsenguitars (8) on 08, Dec. 2010 22:04 (HKT)
Beautiful Artwork
The backgrounds in this game are truly a sight to behold. Really nice game to look at. That said, I haven't played it that much yet. Pretty good so far, though.
1 »