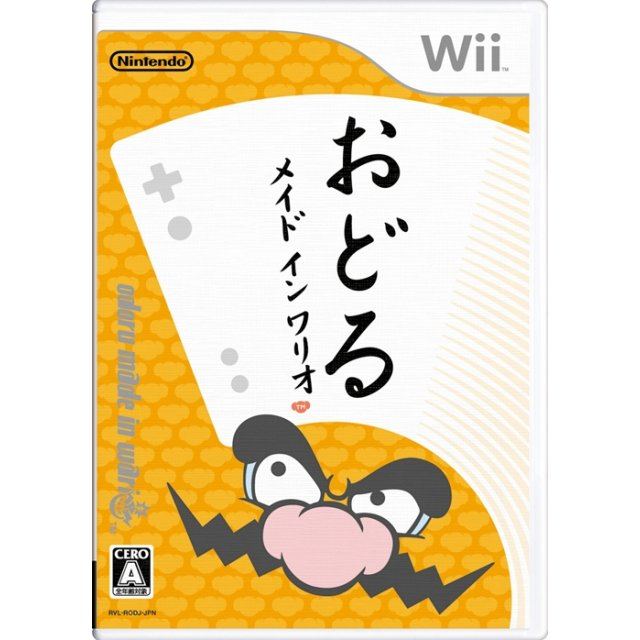 Odoru Made in Wario

The WarioWare team took an idea so wacky, it could only be made with the latest technology: the Wii Remote controller! Wario stumbles into an old building called the Temple of Form. Inside, he finds a mystical treasure called the Form Baton. There are many ways to hold and move the baton (called "forms"), and legend has it that if the holder follows the forms, he can overcome any challenge. With this discovery, the form craze spreads and soon everybody is doing their best to master the moves.

If you are familiar with Odoru Made in Wario, why not let others know?

[This review is based on another version of this product]
matthewkillian10 (3) on 12, Oct. 2009 23:10 (HKT)
PLAY IT
This game is a great buy, it's cute, more addicting than ice cream, and excellently adapted to the Wii remote's functionality. You will not regret buying this.
tidusffxman (4) on 28, Apr. 2009 09:09 (HKT)
Really really awesome!
I love all the Warioware games, and this one is no exception... this is every bit as engaging as the others... the only problem i have is that it doesnt have a whole lot of unlockable content, but then again the only one that DOES have a lot is twisted. if you do not have this game, get it! its very expensive still, but if you find it on sale like i did, its a steal!
tidusffxman (4) on 21, Apr. 2009 14:15 (HKT)
Super fun wii game!
this is a really great game, and consequently this also makes it expensive. On the other hand, if you get it on sale here, its an amazing value! i got this game on sale for $14! and it was worth every penny if not more! so much fun, and another great addition to the series
visual (15) on 04, Jan. 2008 15:24 (HKT)
must have game for the wii~
i finally ordered this after it went on sale for 29.99$ special on play-asia -- and am i ever glad i did!

much more fun than i expected, i love the style and the little games are a blast to play with friends. i can\'t stop laughing when i\'m playing. this is one of my favorite games for the wii!
newinjapan2002 (143) on 02, Mar. 2007 12:10 (HKT)
Super
The usual craziness you expect from a Wario title. This Wii version is great fun! A little short, but plenty of fun, and a lot of thought went into finding new ways to use the Wii remote. Fine game to have on the Wii. And if you like Wario I recommend you check out Raving Rabbids, it\'s also a series of mini-games and also a lot of fun!
1 »