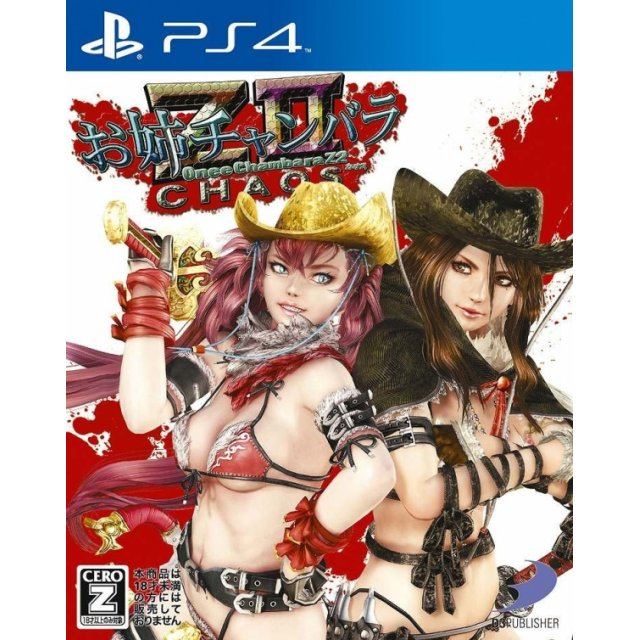 D3 Publisher
Rated
By Our Customers
Compatible with PlayStation 4™ (PS4™)

Works on all systems sold worldwide, a correct regional account may be required for online features.
24h In stock, usually ships within 24hrs. (Only 1 left in stock.)
US$99.99
Limited time offer - Secure yours now before the offer expires!

Developers Tamsoft have madeOneechanbara Z2 Chaosan absolutely gorgeous game in 60FPS, 1080p glory! And with graphics like thatthe game needs the visuals to match- including thesame raunchy and risque visuals we've come to expect, now for the PS4! The levels of sexy have been turned up inZ2 Chaos, something fans of the series won't be surprised by!First Print Editions will include the 'Banana & Strawberry'costume, ahem, or lack there of.

For those notsidetracked by the character models: have we got some gameplay news for you! The largest and most talked about gameplay change is the addition of the new combat system dubbed'Cross Merge Combination System';meaning you can have more than one character 'active' on the battlefield at any point, removing the need for on-the-fly swapping.

Switching characters can be used as part of a combo, allowing experienced players tocoordinateattacks among charactersto execute specific attacks! Do keep in mind that this feature is limited to two characters at the beginning of the game but you can obtain the other two character spots via standard progression. But who will we be playing with? The beautifulKagura, Saya, Aya, and Saki!

If you are familiar with Oneechanbara Z2 Chaos, why not let others know?

Shelkopryad (7) on 10, Oct. 2019 01:37 (HKT)
Best slasher with fanservices
Отличный слешер с кучей фансервиса!
Zack (26) on 02, Apr. 2016 08:51 (HKT)
Excellent
Very nice game！
E-n (7) on 16, Jul. 2015 14:14 (HKT)
Quite enjoyable
Fun and relatively short hack-n-slash affair with good enough replayability, that never takes itself
seriously. Not what you'd call a looker (girls nonwithstanding) and generally feels rough around the gameplay edges (as is expected from an ex-budget series), but has quite a bit more to its zombie slaying mechanics than the inital impression may give. Links, cancels, knowing when to dodge and when to trigger Super mode or do a full-blown rushdown with all 4 heroines - Z2 is more than able to keep one entertained
for hours, provided one can kick back and simply enjoy the absurdity of it all.
wetheelk (2) on 12, Jun. 2015 22:36 (HKT)
verry fun hack and slash
had a lot of fun slaughtering waves of enemys in this stylish hack em up game it plays well and the characters are well balanced.
mortalkombatmaster74 (5) on 21, May. 2015 05:21 (HKT)
xD This game was fun
This is a game where you probably won't pay much attention to the story because you will be to busy wanting to hack n slash away at demons and admiring the female cast. Overall the story is pretty simple! Hot half naked female samurais (with demonic like powers of their own) taking on waves of demons.
1 »