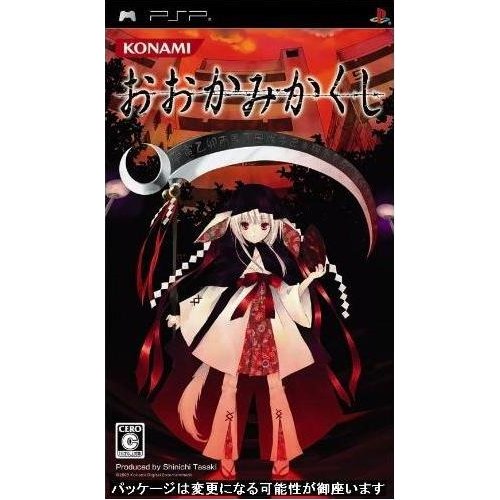 Works on all systems sold worldwide, a correct regional account may be required for online features.
1-2w Expected stock arrival within 1-2 weeks.
US$40.90
Our previous price:US$ 58.90
You save: US$ 18.00( 31% )
Konami
Rated By Our Customers
Compatible With Sony PSP™ (PSP™)
Version

Works on all systems sold worldwide, a correct regional account may be required for online features.
1-2w Expected stock arrival within 1-2 weeks
Price
US$40.90
Our previous price:
US$ 58.90
You save:
US$ 18.00( 31% )
Play-Asia.com Return & Refund Policy

If you are familiar with Ookami Kakushi, why not let others know?

As stated above, I cannot read the language this game is in, but I still enjoyed this game. The very first scene in the game, a girl being chased around by people wereing the same outfit as the girl above, manages to build the tension quite well, even for somone who can't tell what is going on.

Peach-Pit, who did the art for the game, did a very good job. The character designs look very nice, especially for the girl shown above, though one character looks VERY similar to someone from another of their works, Shugo Chara, but that's not a big deal.

The music is very good, as well. It fits the mood of the scene well, sometimes VERY well, and the opening song, "the beginning of the end" is very cool.

The game has some oddities; one being that, like a certain other work that Ryukishi07 worked on we are forced into a bad end(actually QUITE many) before we see the full story, some being pretty violent, like one where you are hit by a car, and the screen gets more and more blood on it and gradually turns fully red. Another oddity, which is clever, is the sprites for the characters sometimes acting out what is going on, like one character slowy bumping another character away.

It is hard to go into the story without spoilers so I will just say that while it starts similar to Higurashi no Naku Koro Ni, it starts off on its own soon enough.

The first chapter took mover one hour to finish without skipping, and the rest took a varying amount of time, all usually over half an hour, so you will spend a lot of time figuring out what options lead to which ending, and will eventually unlock the last story. Finishing that unlocks some extras, which I wont mention, other than CGs.

All in all, while foreign players may not be able to read it, it still has a good story, atmosphre, and some things can be figured out with some thinking.