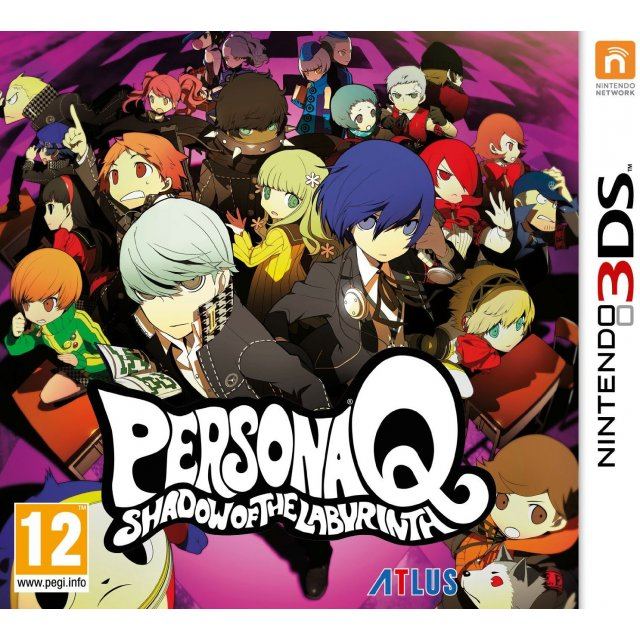 Collections
NIS America
Rated
By Our Customers
Compatible with Nintendo 3DS™ (3DS)
For PAL systems only.

Japan’s renowned Persona Series offers another treat to all game enthusiasts as it releases its newest title Persona Q: Shadow of the Labyrinth! It is a spinoff to the Persona 3 and 4 titles that brilliantly joins favourite characters from both titles and features adoptive gameplay mechanics from Altus’ celebrated Etrian Odyssey series. Persona Q’s release also celebrates the series’ expansion to other consoles as it becomes the series’ first title to be released on a Nintendo handheld console.

Hearing the Chime of Death:

Experiencing one of legends of the “Seven Wonders of Yasogami High” that resulted in the sprouting of a mysterious clock tower and a deadly labyrinth during Yasogami Cultural Festival, join the Persona 4 Investigative Team and the Persona 3 SEES, as they plunge head first into a deadly world of adventure! Compose a team of five from over 20 playable characters each having their own special abilities and dialogues that changes according to the team’s composition. Choose from being either SEES or the Investigative Team and experience two different experiences and plotlines. Win the battle against the Shadows in this labyrinth of death and help the new character duo Zen and Rei regain their memory as they hold the key to the way out of this torturous world.

If you are familiar with Persona Q: Shadow of the Labyrinth, why not let others know?