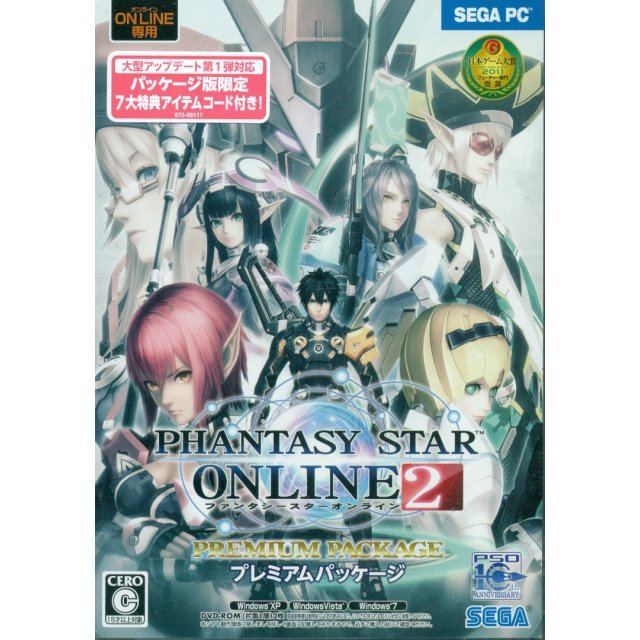 Sega
Rated
By Our Customers
Compatible with Windows™ (PC)

Phantasy Star Online is one of the MMORPGs that shapes the online RPG scenes in Japan. The adventures the gamer can have is possibly endless. This sequel to the legendary game inherits the space odyssey. Join the Oracles crew and explore new planets with the people in the Arcs team.

Create your own hero and carve your own destiny. Make friends with other gamers you meet on the network and take down massive enemies together. The system is greatly improved to give the veteran explorers more challenges. There are missions within missions, you have more controls during battles, besides guarding and sidestepping attacks, you can jump to hit your foes high above.

The studios are creating a PS Vita and a Smartphone version, they expect to create a system to allow gamers to load their save data between all three platforms.

If you are familiar with Phantasy Star Online 2 Premium Package, why not let others know?

[This review is based on another version of this product]
ibraheemdogar (1) on 15, Aug. 2014 02:06 (HKT)
Was able to play till July 2014 no worst game ever
I was able to play this game up till July 2014 then Ip blocked by sega thanks to dodos that happened this past July 2014 now have a game that I paid 65.00 dollars to to buy this game and now can't play this game thanks to someone who hacked the game now international servers are shut of and I an american who didn't do any thing is blocked from playing game and my isp has blocked access to pso2 vita game to Dont buy this game total waste of money and lieing by saying it works on vitas world whide cause it don't only two ISPs have access are time warner and virzion
[This review is based on another version of this product]
curiosfeline (1) on 18, Jun. 2014 12:18 (HKT)
Gotta love it
Very good game, lots of options lots of replay value...
[This review is based on another version of this product]
MDashK (1) on 15, Mar. 2014 18:20 (HKT)
The Best USD I've Ever Spent!
For the fans and lovers of the Phantasy Star series and for those who specially loved Phantasy Star Online in the Dreamcast, GameCube, etc etc, then, THIS is the next game to play. Forget the Universe series. This game literally grabs the best that Universe had, grabs PSO, and upgrades it to the very best there is.
You'll be addicted to this game like you've never been before. I speak for experiece: I started playing the game not that long ago, and I'm already at +500 hours of gameplay. That's another good thing about the game. You literally know how many hours of your lifetime you lost playing this! XD This premium pack, of course, extends your experience to a new level. Not only you get a shiny box to display with your other games next to your PC and/or Console/TV, but also, you get the limited items that comes with it! And the best part, if you don't want or don't like any of those, you can freely sell them away in the players shop and get Meseta for what you really want! My final word is: Definitelly buy this! Support the game! Support SEGA! And trust me: It's totally worth it!
[This review is based on another version of this product]
amored_core (4) on 08, Jan. 2014 05:50 (HKT)
Great game!
Been playing PSO2 vita version for a year now on my vita, (was in the closed beta) and I never really get tired of it XD! weekly updates, friendly English community on Ship 2 and a great hunting game! totally worth it
[This review is based on another version of this product]
trunions (151) on 11, Oct. 2013 13:03 (HKT)
awesome game.
This is a great addition to the Phantasy Star Series. I just wish that it could be played offline, but otherwise it is great.
1 »