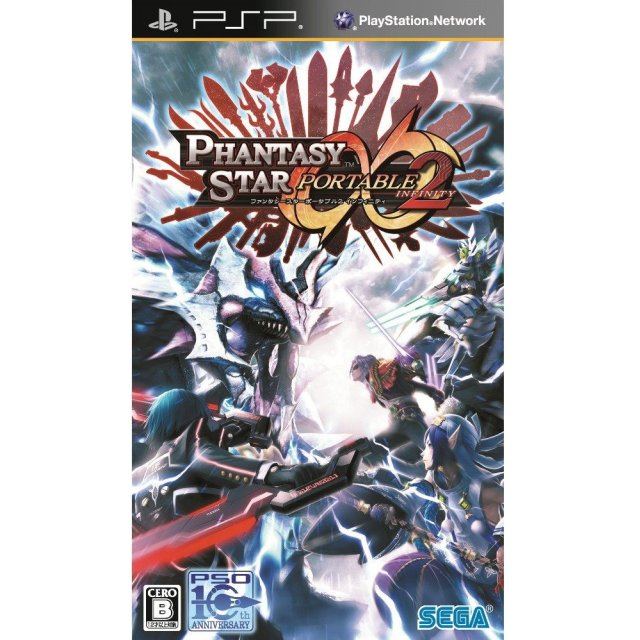 Phantasy Star Portable 2, the previous entry of the series for the PSP® PlayStation Portable, has been extremely popular for its sales of more than 0.6 million units and multiple collaborations outside games, and become a huge hit since its release in December 2009. Exceeding the fantastic prequel, the latest installment of the franchise is already on its appearance.Phantasy Star Online was released for Dreamcast in 2000. To celebrate the 10th anniversary, this latest entry integrates elements and features of the prequels. In addition to the new "Duman" race, new features will be introduced to enhance play values such as “Reincarnation System” to develop characters up to infinity and the “Mission Code” to customize missions. The ultra-high-level “Infinity Rank Mission” will be also added, as well as new monsters and bosses appearing one after another. The number of weapon items will finally reach 3,000. The design of the default characters will be all new, and new clothes and parts will provide the users more choices in character customization than ever before. The RPG game with infinite play values is coming up, pushing the boundary of a portable game.This sequel will introduce the Multiplayer Mode allowing up to 4 players to play via the Ad Hoc mode and the Online Multiplayer Mode using the Infrastructure mode, and a third type of communication Friends Search. With the Friends Search feature, users can exchange Friend characters and mission codes over the Passing-By Connection with users all over the world. The Online Multiplayer Mode will realize chat communication with many people in the Visual Lobby. Even more, the Screenshot feature will save memories of adventure with friends.New story “Episode 2”, a sequel of the story mode “Episode 1” featured in Phantasy Star Portable 2, will be also included in this title. You cannot miss the new story with new characters Nagisa (CV: Nana Mizuki) and Winar (CV: Shinichiro Miki) standing up to another crisis in the Gurhal Galaxy with Little Wing returning from the prequel. Phantasy Star Portable 2 Infinity will completely contain Phantasy Star Portable 2 and even allow transfer of the save data.

Another Century's Episode Portable
US$ 23.99

If you are familiar with Phantasy Star Portable 2 Infinity, why not let others know?

You get all the best of TWO great PSP Games and more with exclusive content- progressing as you transfer your character from previous saved data onwards.
Online Multiplayer is Free- and available with the game purchase!

A must buy for any previous PSO Fans- willing to fight on the relived battle of Olga Flow and more.
Plus, there's Rappys. Need I say more?
Hayato01 (502) on 01, Sep. 2011 08:21 (HKT)
Infinity
Comes with episode 1 which was in the previous version and the new episode 2 with more added features that was not in the previus Phantasy Star 2
Gupy (4) on 22, Aug. 2011 10:37 (HKT)
Phantasy Star Portable 2 Infinity
This game is an expansion of Phantasy Star Portable 2, this game brings with it many new fetures including a second episode in story mode, a new race to play as and a rebirth and weapon syth systems. This game is a must buy for anyone who loves Phantasy Star. I highly recommend it.
1 »