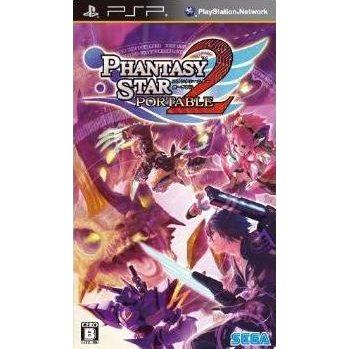 Works on all systems sold worldwide, a correct regional account may be required for online features.
1w Expected stock arrival within 1 week.
US$22.99
Our previous price:US$ 29.99
You save: US$ 7.00( 23% )
Manufacturer
Sega
Rated By Our Customers
Compatible With Sony PSP™ (PSP™)
Version

Works on all systems sold worldwide, a correct regional account may be required for online features.
1w Expected stock arrival within 1 week
Price
US$22.99
Our previous price:
US$ 29.99
You save:
US$ 7.00( 23% )
Play-Asia.com Return & Refund Policy
Trustpilot
Trustpilot
Click on a thumbnail to see more pictures for Phantasy Star Portable 2

Phantasy Star Portable 2 takes place 3 year after the war against the SEEDs. United, the residents of Guraru stand, humans, numans, casts and beasts gave their all to protect their land against invasion and finally sealed the SEEDs. Yet, prosperity does not come with peace because they have used up all resources.To look for new places to live, the people left their dimension to search for a new home. With new dimensions, there are of course new fields to fight in and new monsters to battle. Dive into the under sea relic and battle the Ebiru Sharks.Take up missions and develop your characters. Phantasy Star Portable 2 is full of new discoveries, join in with a couple of your friends and set off on a challenging adventure.

If you are familiar with Phantasy Star Portable 2, why not let others know?

Arado (22) on 20, May. 2013 07:29 (HKT)
Great!
recomend!
Arado (22) on 07, Oct. 2012 13:37 (HKT)
Good quality!
It's come so fast after I ordered. Thank for play-asia :D
[This review is based on another version of this product]
stevechan85 (53) on 14, May. 2011 14:48 (HKT)
Phantasy Star Portable 2 (PSP the Best)
If you get this game because of the opinion that,
this is Sega's monster hunter portable,you'll definitely going to be regret,this consider as ARPG and nothing much similar with MHP series except than 4 player coop,nothing to complain for its graphic since it is on PSP,but unacceptable loading speed.
[This review is based on another version of this product]
umi_ryu (1) on 03, Feb. 2011 23:52 (HKT)
If you liked PSO and PSU, this game is probably not for you.
Don't let the improved type and combat system fool you, it actually hurts the game.
PSU players are probably familliar with the "Just Counter" feature, in PSP2 it is triggered manually by blocking at the right moment for doing a "Just Guard" which is just like the evasion in PSU, after that you can perform just counters. It hurts the game because being able to do it manually and without any restriction means that you can theorically avoid every single damage and counter, redering any defensive stat meaningless.
Speaking of defense, if you want a challenging, hard and fun game, then do not play this game. You will die, a lot, and when you do it's usually because some monster one shot you or stun locked you, and you are only allowed to die once per mission.
Among the cheapest things in the game, bosses for one, don't expect finishing the solo campaign straight without ressorting to cheap tactics such as using the long range rifle while standing in the corner where the boss won't attack much. Expect to see monster spawning right at the start of a block and attacking right away while the game is loading your weapons, making you wait a few seconds without being able to retaliate. Also, expect to see Bil de Bears flying above you, disapearing and being reset when you try to use your blasts, giving them their one second invincibility (like when they spawn) which is well enough to make your blast pass through them.
And, as said earlier, unless you are far above the level of the monsters, expect to die in a few hits.

I don't recommend this game to anyone, if you want an insanely hard but fun game try Monster Hunter or Demon Soul.
Phantasy Star Portable 2 is not hard it is cheap, only play it if you are willing to spend hours learning to just guard everything, rendering the already bad combats boring. And also expect hours and hours of mindless leveling.
[This review is based on another version of this product]
Tortum (32) on 19, Dec. 2010 11:11 (HKT)
Phantasy Star Portable 2
All the goodness of its predecessor with a whole lot of goodies thrown in make this a sweet game indeed. Infrastructure support allows players to play with each other all over the world which increases enjoyment for the game nine-fold. Go create a character in story mode and make it into the best you can, then go play online with your friends.
1 »