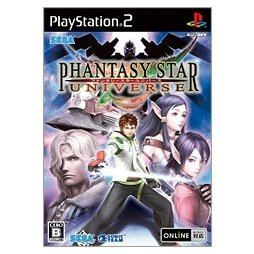 NTSC
1w Expected stock arrival within 1 week
Price
US$34.99
Our previous price:
US$ 64.90
You save:
US$ 29.91( 46% )
Play-Asia.com Return & Refund Policy
Trustpilot
Trustpilot
Click on a thumbnail to see more pictures for Phantasy Star Universe

The long awaited new title in the beloved Phantasy Star series is on its way! Phantasy Star Universe delivers a rich, ever evolving world and will provide hours of entertainment to both online and offline RPG enthusiasts. Single-player fans will embark on an offline quest as Ethan Waber, a 17-year old cadet intent on saving his sister from an invasion of mysterious life forces called THE SEED. While online players will create their own characters from a range of races, and then set off to explore all three planets in the Gurhal solar system. Fans will travel with a squad of other adventurers, enter urban sprawls teeming with hundreds of other players, and build their avatars into powerful warriors.長い歴史を誇るセガオリジナルのＲＰＧシリーズ 「ファンタシースター」 の最新作 『ファンタシースターユニバース』 が遂に登場！シリーズの特徴であるＳＦファンタジーの世界を舞台に、三つの惑星をめぐる壮大な、そして全く新しい物語が今、幕を開けます！！

If you are familiar with Phantasy Star Universe, why not let others know?

Because I only played the offline portion of this game, my initial impression was that it reminded me of the .hack// series -- playing a single player game in a pseudo-MMORPG setting. The only difference from the .hack// series is there really is a MMORPG to be played. While it is not completely accurate to describe them as similar, on a loose basis they can be, especially in terms of the battle system. You run around with two other AI-controlled players and battle enemies as you encounter them. In PSU, there is no transition from exploring to battle, so it helps keep the pacing. The battles feel frantic enough that it doesn't feel like just mindless attacking. Don't get me wrong, it has it's fair share of button mashing, but unlike other real-time action RPGS, I found myself making more often making defensive moves.

The visual presentation is good, but nothing spectacular. Trying to be as objective as possible for a past generation game, I still found the characters to be a bit lifeless looking. A lot of the animations don't really convey much energy, so it is not as engaging as other games (though that could just be modern day bias). The sound design is on a slightly higher level. The music is fitting and so are the character voices.

For a single player game, I consider this to be a good game. But I feel that the main intention of this game was to be played online with many other players. Unfortunately, I was a bit late and did not get to experience this. If you enjoy MMORPG style games and don't mind playing by yourself, then you may want to try this out.
[This review is based on another version of this product]
Sherlockindo (1) on 20, Aug. 2009 22:47 (HKT)
Cool game!
What a good game! The price is also very good! Although I don't play it online, but at least I can enjoy the 12 chapters of the offline mode.

Buy it if you're a RPG or Phantasy Star lover!
1 »