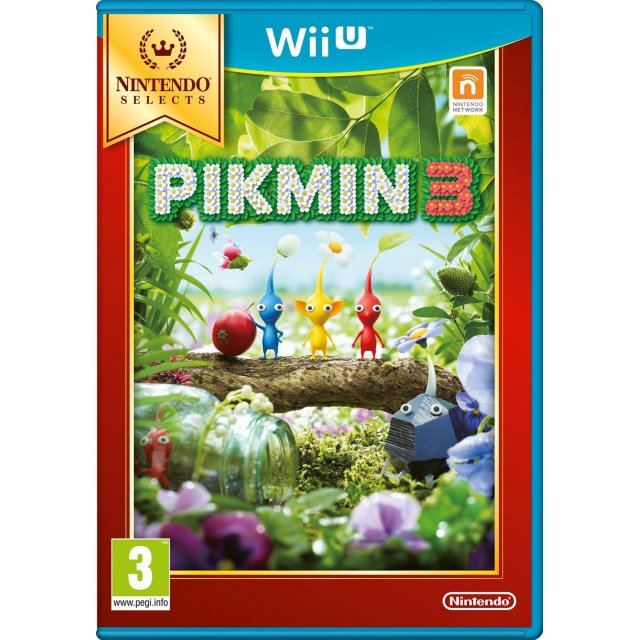 Nintendo
Rated
By Our Customers
Compatible with Wii U™ (Wii U™)
For PAL systems only.

PAL
24h In stock, usually ships within 24hrs.
US$25.99
Manufacturer
Nintendo
Rated By Our Customers
Compatible With Wii U™ (Wii U™)
Version

The Return of an Army Pikmin 3 is a fully reimagined, mass-action strategy title from the critically acclaimed Pikmin series. Players will discover a beautiful world filled with strange creatures and take command of a swarm of ant-like Pikmin trying to survive. The world is densely packed with treasures and enemies, which makes the game much more action focused and fills it with layers of potential strategies and paths, adding greater replayability to challenge modes.

If you are familiar with Pikmin 3 (Nintendo Selects), why not let others know?

[This review is based on another version of this product]
piskiramel (35) on 11, Apr. 2018 00:53 (HKT)
Great addition to the series
A big fan of the 2 first pikmin games for the gamecube,i was waiting for more than 10 years for the return of the series.
Fantastic graphics and great gameplay.No fan shouldn't miss it.
[This review is based on another version of this product]
rolemosda (1) on 15, Oct. 2013 16:56 (HKT)
;0)
Excelente jogo de extrategia, com visual incrível, não somente para crianças (meu filho de 9 anos gostou bastante)
Só ficaria melhor para crianças se fosse em portugues...
[This review is based on another version of this product]
andrescapo_ (177) on 03, Oct. 2013 02:44 (HKT)
Pikmin are back
I played both of the first 2 games on release so I have been waiting a long time for this one and I'm glad to say its a great game.
I never expected it to be any less since I trust Nintendo when it comes to making games for their consoles.
Both the Gamepad and the Wiimote plus are great ways to play the game, if you like the gamecube controls use the gamepad, if you like the Wiimotion controls used in the Wii ports of the game use a Wiimote plus.
The only bad thing about the game is that its not too long, I was kinda sad when it was over, just because I wanted to keep exploring and getting stuff.
[This review is based on another version of this product]
JunYi (24) on 11, Sep. 2013 09:27 (HKT)
Great game !
Very fun and beautiful. The pikmins are so cute. The gamepad is really useful to help you to find your lost pikmins at the end of the day.
But if you played the previous ones this game is easy, the level design is not as complex as the second Pikmin. Even so the game is still very good, easy to control, funny story.
It's a must have as every Nintendo games.
[This review is based on another version of this product]
briceparis15 (7) on 07, Aug. 2013 20:20 (HKT)
Great Game!
Just start the game and have fun!!! Those simple words to say Pikmin 3 is a real adventure game with the "Magic" of Nintendo.
The graphic are so nice and it's very easy to play: Nintendo touch!!
Please try it.
1 »