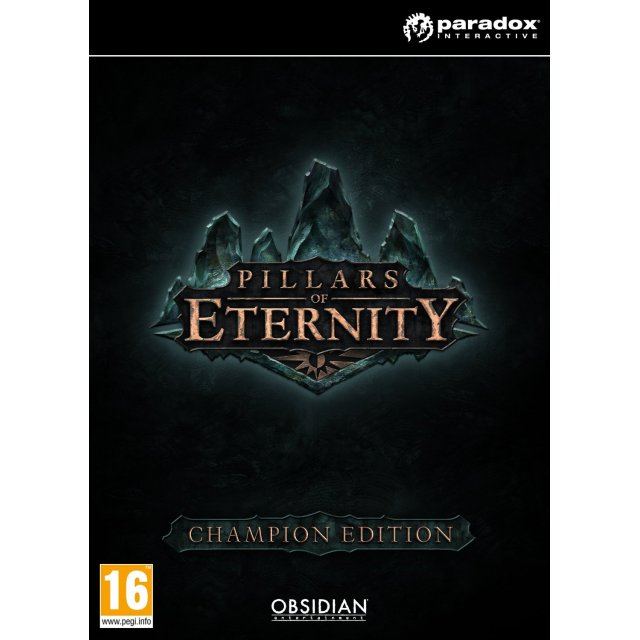 sold Out of print / Out of stock.
Manufacturer
Ikaron
Compatible With Windows™ (PC)
Version

Obsidian Entertainment proudly brings its biggest masterpiece from one of the most successful crowdfunding game campaigns aiming to recapture once more the magic, creativity, depth, and nostalgia of classic RPGs in Pillars of Eternity! Pillars of Eternity is a party-based real-time game with pause dungeon exploration set in an original high fantasy setting that promises to bring a game with classically mature-themed story with deep dialogues, reactive characters, and meaningful choices and consequences.

Inspired from its spiritual ancestors - Pillars of Eternity binds together the epic exploration of Baldur’s Gate, the intense combat and dungeon diving of Icewind Dale, and the emotional writing and mature thematic exploration of Planescape: Torment, the result is a contemporary take on all the factors which contributed to the golden age of gaming

Pillars of Eternity is set in its original IP where the main character is highly customizable from player’s choice of class, gender race (and subrace), culture, traits, skills, and appearance that will shape the character’s lore, background, story, and destiny. Pillars of Eternity lets players customize their own gaming experience as they choose their desired options and feel in control. Play in the classic locked isometric camera view together with elements of tactical combat where the party and the battlefield can be viewed.

Pillars of Eternity Champion Edition includes:
- Digital Original Soundtrack: This soundtrack contains many of the game's music tracks performed by a live orchestra. Contains at least 17 tracks in MP3 and FLAC formats.
- Digital Campaign Almanac: The Campaign Almanac contains everything related to the lore, history, and world of Eora as originally told by Hylsman Horag and revised by the Hand Occult. The 35 page almanac has commentary provided by a variety of authors and is an engrossing read for anyone keen to delve deeper into the world of the Pillars of Eternity.
- Making of Documentary: A video documentary of the entire Pillars of Eternity development process - from beginning to end. Includes commentary from the developers and behind the scenes footage of game shows and events.
- Digital Hi-res Game Map: A high resolution map of Eora's Eastern Reach. Details include locations that players will be traveling to and locations that they may be seen in future Pillars of Eternity products.
- Wallpapers: High resolution and multi-monitor wallpapers of cool concept art and in-game artwork.
- Ringtones: Short clips of sounds and music from Pillars of Eternity. Perfect as mobile ringtones.

No reviews for Pillars of Eternity - Champion Edition (DVD-ROM) yet.