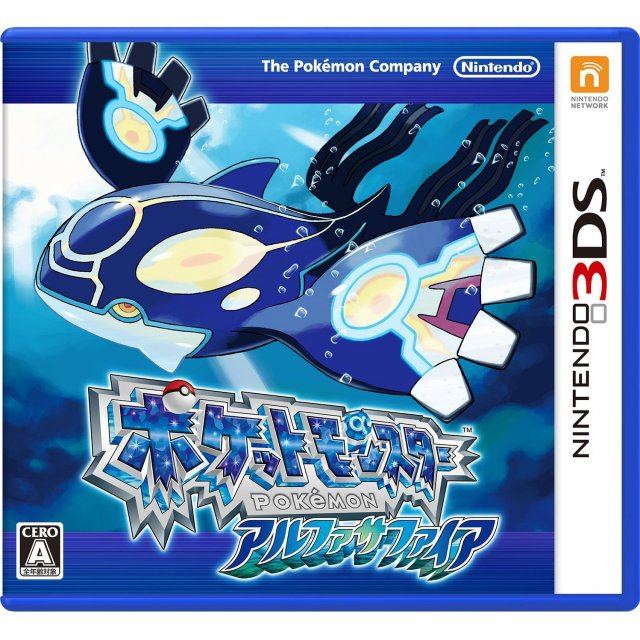 Nintendo
Rated
By Our Customers
Compatible with Nintendo 3DS™ (3DS)
For JPN/Asian systems only.

Nintendo has also been teasing the development of the story, more specifically the lore behind Mega Evolutions and their connection to the legendary dragon Pokemon Rayquaza. The headlining legendary Pokemon Kyogre and Groudon, along with numerous others, will also be receiving Mega Evolutions but Rayquaza's biology is said to hold the answers to the many questions revolving Mega Evolution.

timey84 (133) on 26, Mar. 2017 05:59 (HKT)
New improved like Xny!!!
A sincere remake from the GBA series using alotnof Xny features, new animation, and battle too!!! Totally worth it.
hendry79 (20) on 14, Feb. 2017 11:07 (HKT)
Nice Game and fun
Parcel received in good condition, took 16 days for normal delivery. Nice game to play, recommend for beginner Pokémon Trainer too.
lava_princeton (7) on 12, Jul. 2015 00:59 (HKT)
On of the best!
Ruby/ Sapphire were my favourite Pokemon games, so this remake is a winner for me! I missed the customisation and promo videos in X/Y, but Alpha Sapphire makes up with a fun story, a host of new features like soaring in the sky and catching legendaries from previous games, and of course secret bases!! Additional streetpass and Wifi functionality have made it all the more enjoyable. By far a personal favourite and one not to be missed for anyone who loves Pokemon!
n2y88 (10) on 13, Dec. 2014 11:44 (HKT)
Awesome!
I've always felt that the best region for the pokemon story was the Hoenn Region and to get to play it again, in full 3D - all my feels just can't be summarise. The new features in the game (together with the old ones) just makes it all the more fun to play, and while I initially had some trouble with the joystick movement (too used to the fluidity of ACNL) I eventually got used to it. Loads of surprises in this remake! Enjoy! :)
shadowstar123 (249) on 13, Dec. 2014 00:52 (HKT)
Fantastic game for Nintendo 3DS
This is probably the best 3D Pokemon game between Nintendo DS and Nintendo 3DS. I would say this game is about as good as Pokemon Black and White 1 and 2.

Fantastic gameplay, great updated music, easy to follow story and maps, and a great upgrade from the original GBA versions.

Everything about this game is good, there are only 2 problems I had though that Nintendo seems to like lately. Every Pokemon game these days seems to have some city that is a nightmare to navigate. In this game, it is Mauville City. I am not sure if the whole thing is inside a giant building or something. It is just hard to figure out where you are going because of the strange camera. Outside of this, everything in Pokemon ORAS were just amazing. I highly recommend this game. Also, if you have Dairantou Smash Brothers for Nintendo 3DS and one of the Pokemon games, log into ClubNintendo Japan and you can download a Smash Brothers version of Gekkouga.
1 »