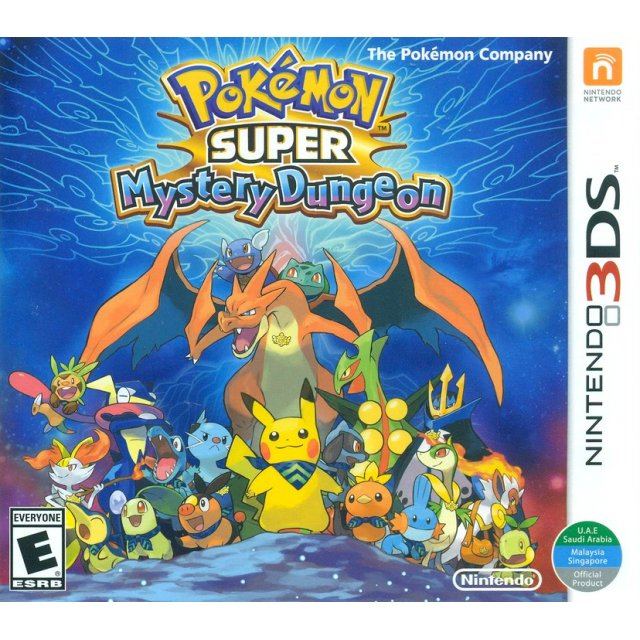 Look forward to the launch of Pokémon Super Mystery Dungeon in winter 2015, continuing in the legacy of the exciting Pokémon Mystery Dungeon video games! With dungeon layouts that change every time you enter them, the fun never ends! Battle alongside Legendary and Mythical Pokémon to save the world from a crisis in a tale of unprecedented scale. You'll get to pick one of 20 Pokémon to become your partner. With the Pokémon you choose, head out on a quest to encounter all 720 Pokémon, including Legendary and Mythical Pokémon. Set off on a grand adventure as you explore ever-changing Mystery Dungeons and connect with Pokémon to save the Pokémon world!

If you are familiar with Pokemon Super Mystery Dungeon, why not let others know?

Helixdragon212 (1) on 01, Feb. 2016 12:02 (HKT)
Pokemon Super Dungeon
The Pokemon company, Chunsoft and Gamefreak pulled no stops in making a truly 'Super' mystery dungeon game.
If you are a fan of the older Explorer series, you are in luck. There are a lot of references to the older games throughout the story line and not to mention the widest and most adverse world brought alive by the various Pokemon.
Now, the game's story is unique. a cliche less and unpredictable. It has the blend of a perfectly balanced story with enough laughs and tears. And not a new trait of the MD series is the long Chapter progression.

Don't get me wrong, but the story is good, but the game play is sort of frustrating. The infamous 'Belly' system and the 'Push Ally' feature is useless and gives you further frustration. Because if you push your teammates, your belly drains rapidly. If you run, the belly drains rapidly and if you're stuck without any means to fill it, you would faint as fast as a Magikarp in a battle. Then there is the annoying 'Job Requests' system and the random 'Monster Room' Missions. the game expects you to level up your player so much that it thinks that you an handle it easily.

But cons aside. The game has one interesting feature to let you start up another team to rescue yourself in the event of you fainting. I'll leave you in the dark here for you to find out for yourself.

Overall, the best part of the game is that this game is dedicated to the late Satoru Iwata, the father of the Nintendo Handheld, in the credits, that i think is the greatest tribute to a revolutionary.

Finally in conclusion, if you like a gripping story line, a great game and if you don't mind the crappy game play mechanics. and even better if you are the fan of the Mystery Dungeon Explorer Series, then don't falter and go for it!
Kuveira (2) on 29, Dec. 2015 18:41 (HKT)
Excellent Pokemon Mystery Dungeon game!
The game is on par with Explorers of Time/Darkness/Sky! The main scenario and dungeons in it are a bit short in my opinion, but the epic ending redeems them all, besides the difficulty of the game will require to use all the items you have in your inventory. Deffinitely a must buy game for any pokemon fan.