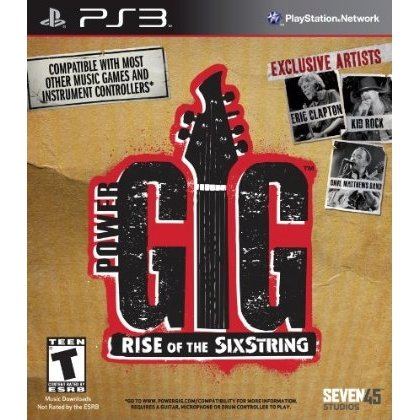 Power Gig: Rise of the SixString

Works on all systems sold worldwide, a correct regional account may be required for online features.
1w Expected stock arrival within 1 week.
US$23.39
Our previous price:US$ 64.90
You save: US$ 41.51( 64% )
Manufacturer
Seven45 Studios
Compatible With PlayStation 3™ (PS3™)
Version

Works on all systems sold worldwide, a correct regional account may be required for online features.
1w Expected stock arrival within 1 week
Price
US$23.39
Our previous price:
US$ 64.90
You save:
US$ 41.51( 64% )
Play-Asia.com Return & Refund Policy
Trustpilot
Trustpilot
Click on a thumbnail to see more pictures for Power Gig: Rise of the SixString

The true evolution of the band video game experience is set to occur this fall when Seven45 Studios unleashes Power Gig: Rise of the SixString for the PlayStation 3. Power Gig’s use of exciting, new technology offers gamers a more authentic and fun experience, while transporting players to an entirely new universe, with its own mythology, politics, heroes and villains, where music rules all.

Music industry superstars Eric Clapton, Dave Matthews Band and Kid Rock have each entered into exclusive agreements with Seven45 Studios to provide songs for Power Gig: Rise of the SixString. The deals mark the first time ever that songs from each of the three artists will appear as part of a band video game. Power Gig will feature a robust song list featuring major label artists and emerging talent from the indie scene.

No reviews for Power Gig: Rise of the SixString yet.