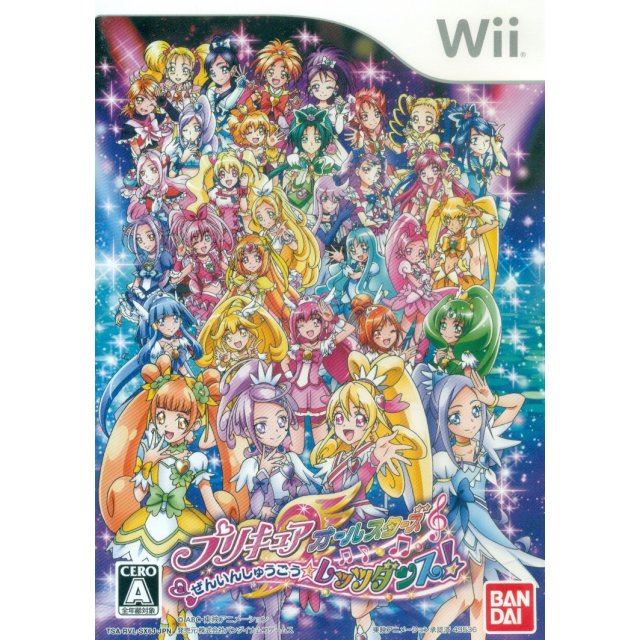 12 songs and 20 stages of Pretty Cure themed dancing await you in this rhythm based dancing game based off the popular Pretty Cure All-Stars series for one or two players.

If you are familiar with Precure All Stars Zeninshuugou * Let's Dance!, why not let others know?

hector_daniel_ra (1) on 25, Apr. 2013 09:23 (HKT)
Pretty nice, but...
You'll like to buy this game ONLY if you are a real precure fan, if you are not, maybe it's best for you to look for another dance game. Really nice and cute game :D
Cranberry (32) on 16, Apr. 2013 10:59 (HKT)
Fun Game but Needs a Char Select
This game has you dancing with the famous Pretty Cure characters. There are 12 songs to choose from and while it is fun to dance with the characters, a glaring omission is the inability to choose specifically which characters to dance with.

The dances are fun and cheery and the characters colorful and bright.
Cranberry (32) on 11, Apr. 2013 09:46 (HKT)
A Fun But Short Game
This is a dance game that features many characters from the Pretty Cure series. This game definitely targets young girls as the demographic. While the Pretty Cure teams are known for fighting fierce monsters and saving the world, you'll find none of that here. Instead, we have our beloved Cures in a dance game, and you are invited to dance along with them! The songs and characters are very colorful and cheery; very upbeat. You are tasked with moving the Wiimote in synch with the on-screen prompts in order to match the moves of the Pretty Cures and earn points. Earning points allows you to unlock more songs, and later, you'll also gain access to additional stages that feature familiar songs but with different Cures dancing to them.

The game is very child friendly. Your goal is to gain as many points as possible, but the game will never punish you for performing badly.

One glaring flaw this game has is the inability to choose which Pretty Cure characters to dance with. Naturally everyone is going to want to dance with their favorite Pretty Cures, but all you get is pre-set characters tied into certain songs. There doesn't seem to be any way to change the characters.

The game is also rather short. This is the first time I've ever played a dance game, and I had everything in this game unlocked in about 30 minutes. The songs are exactly the same every time you play them - there's not a lot of replay value.

There is a 2 player mode to allow 2 players to dance at the same time, and both of your points will be combined towards unlocking things. There is also a "hard" mode which removes the on-screen prompts.

The main reason to get this is if you or your child is a Pretty Cure fan and you want to dance with your favorite characters. If you don't already have an affinity for Pretty Cure, you can probably get other similar dance games for cheaper.