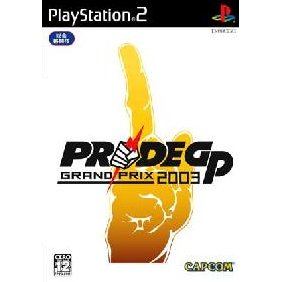 sold Out of print / Out of stock.
Manufacturer
Capcom
Rated By Our Customers
Compatible With PlayStation 2™ (PS2™)
Version

Pride GP 2003 is Capcom's wrestling update to their previously released "Pride" title. There are 16 playable characters, each with his own fighting styles, such as wrestling, karate, kick boxing and so on.

If you are familiar with Pride GP 2003, why not let others know?

martgonzo (1) on 15, Apr. 2004 07:09 (HKT)
pride gp 2003
i wanted this game for the begginning of the easter holidays to give me something to do. i received the game very promtly which i was very pleased with, however, unfortunatly i found the game has a minor flaw...its bollocks. to its credit there are more positions included from the previous outing \'pride fc\' such as the side mount, however, for some reason once your in one of the new positions say the side mount you\'re only able to stay in that position for a max of about 3 seconds which frankly sucks. also the animations are shite, the players simply move too fast for it to seem realistic and the puches and kicks seem uncontrolable and inaccurate. for a good half an hour i was convinced that i had been sent the ps1 version of the game judging by the quality of the graphics, the quality of the crowd is crap at best. the fighter models movements are shoddy and unconvincing and of course there are huge collision detection problems. another point worth making is that there is not enough variation between fighters in terms of moves so far i have discovered about 1 special move for each fighter. for crocop its the instant knockout highkick, for fedor its the punch flurry in the guard followed by his trademark hook and for nogueira you are able to press x and square to do a special setup for the triangle choke other than that every takedown is identical and i find it difficult to distinguish between one punch and another. the music is fine because it dosnt play when your in a match, unfortunatly the sfx do, they are the most OTT and innappropriate sounds possible. for example when you shoot in for the takedown upon contact the sound can be compared to that of a horrendous car crash. if you do not already have \'pride fc\' then i recommend buying that as it is a really quality game. if you have this game then i recommend you buying one of the K-1 games although they are not mma they are martial arts and they are made by konami who know how to make games properly.