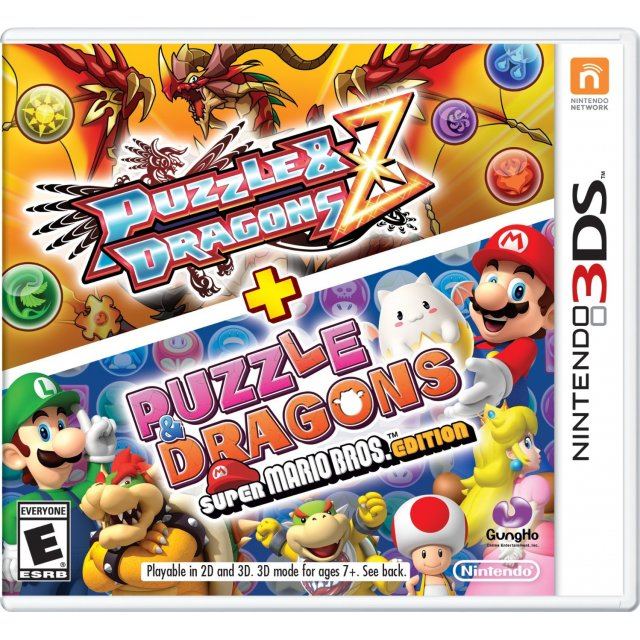 From a standout mega hit and awarded mobile puzzle game series, the phenomenal Puzzle & Dragons will once again land on the Nintendo 3DS. Puzzle & Dragons took mobile application stores by storm as it crossed 41 million downloads worldwide with more than 1.5 million copies shipped in Japan! With its incredible success, its localization for 3DS consoles is expected to unfold another big thing!

Explore dungeons in the land of Dracomacia and discover new locations with the customizable Dragon Tamer avatar in Puzzle & Dragons Z. Collect dragons on your way and play puzzle games that will power your dragons’ actions in challenging battles. Match 3 or more orbs and make chain combos to inflict more damage to enemies. Get rewards after each battle and use them to unlock hidden potentials of your dragon companions. The game also features addicting elements from series like Pokemon and Bejeweled.

Puzzle & Dragons: Super Mario Bros. Edition offers a new spin-off based on the classic Super Mario universe. Now combined with Mario Bros. characters, Puzzle & Dragon series will do even better as players will traverse in traditional Mario fashion. With the same gameplay mechanics to Puzzle & Dragons Z, the newest edition uses the power of orbs to take down Bowser’s minions and save Princess Peach. Also witness the characters evolve as they level up like Mario turning into Tanooki Suit Mario. Team-up with other characters to unleash more powers and even turn enemies into your allies! Furthering its nostalgic effect are first Super Mario’s iconic sound effects set throughout the game.

Uncharted: The Nathan Drake Collection
US$ 24.99