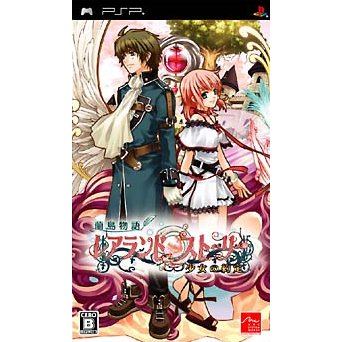 A mysterious girl Chiria appeared in a war torn country and wiped out the monsters that ravages the land with a miraculous light. You, the war hero is entrusted with the mission to take care of the amnesiac girl and bring her up into a charismatic lady.The game is separated into two parts. Use the nurturing commands to bring up transform Chiria into your dream girl in the nurturing part and develop your friendships and romantic relationships with the cast of loveable characters in the adventure part.Lastly, conflicts of interest happens, what will you do if you have to choose between Chiria's happiness and your own? Your future and all the supporting character's depend on you.彼女を守る…少年の誓い 秘められた少女の約定記憶喪失の少女『チリア』の不思議な力…彼女を守り、育む主人公と、少年・少女達の物語『蘭島物語 レアランドストーリー 少女の約定』は、ヒロイン“チリア”を、様々な育成コマンドを用いて成長させる『育成パート』と、主人公である“ヒロ”“チリア”そして、魅力的なキャラクター達との友情、愛情を育む『ADVパート』によって進行する、育成・恋愛シミュレーションゲーム です。あなたは不思議な力を持った少女“チリア”を、魅力的な女性に育てることができるでしょうか。チリアの幸せを求めるか、それともヒロ自身の幸せを求めるか…２人の、そして登場人物達の将来は、あなたしだいです。

If you are familiar with Ranshima Monogatari Rare Land Story: Shoujo no Yakujou, why not let others know?

moonwaterfairy (24) on 23, Jan. 2010 01:23 (HKT)
No title
It's really a wonderful game. You can control pretty much every aspect of Chiria's life and change her appearance and the appearance of her surroundings. It's also much easier to earn money in this than it is in Princess Maker, so you won't always be broke. It's also shorter than Princess Maker, so you won't have to worry about getting bored or forgetting what ending you were shooting for.
aaurya (14) on 13, Nov. 2009 19:19 (HKT)
I enjoyed this totally!
Those who played princess maker series might be familiar with this sort of adventure game, whereby you could raised the stats of the girl and depending on her stats, and the choices you made at various intervals, it will affect the outcome of the story. Not only that, it has nice graphics and voiceover, the game paced at a span of 4 years, making it not too long till one gets bored, and not too short that it seemed to finish in a flash. ^_^

Also, you get to change Chiria's outfits and hairstyle (and each time you completed a game, you earn bonus points whereby you can unlock more outfits and hairstyles ^_^) Another fun part is you are able to decorate the house, and by putting in some $$ for home improvement, you could make the mansion much better, and Chiria's mood will be better if the house shes living in is in a good condition. Similarly, pay zero attention to home improvement, Chiria's mood will drop. Clothing and hairstyle also plays apart to Chiria's temperament ^_^

The unique aspect to this game is, not only can you determine Chiria's future, your character can also develop relationships with the other female characters in the game =p (just as much as Chiria could with the male characters) ~ or you can aim for them together ^_^ There are multiple endings, making this game high replayability factor.

But like any other Japanese game, the language is Japanese, and though it's not as text heavy as other visual novels, there is still considerable amount of text in the game.