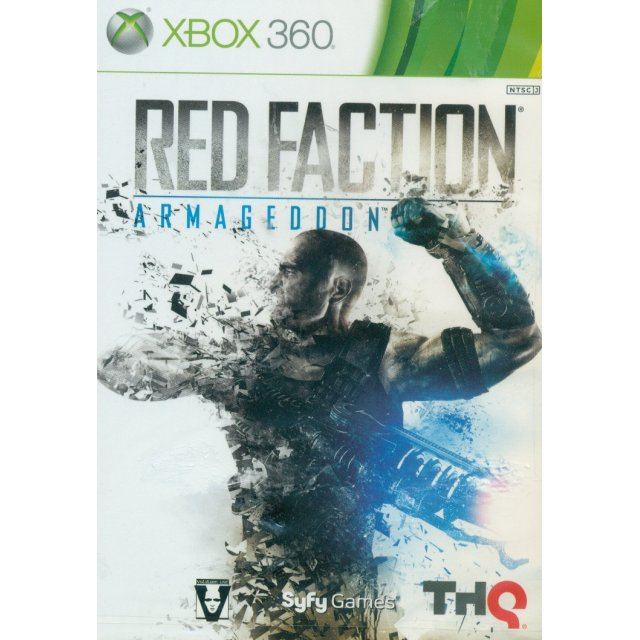 THQ
Rated
By Our Customers
Compatible with Xbox360™ (X360)

Works on all systems sold worldwide, a correct regional account may be required for online features.
24h In stock, usually ships within 24hrs.
US$9.99
Our previous price:US$ 44.90
You save: US$ 34.91( 78% )
Manufacturer
THQ
Rated By Our Customers
Compatible With Xbox360™ (X360)
Version

Works on all systems sold worldwide, a correct regional account may be required for online features.
24h In stock, usually ships within 24hrs
Price
US$9.99
Our previous price:
US$ 44.90
You save:
US$ 34.91( 78% )
Play-Asia.com Return & Refund Policy
Click on a thumbnail to see more pictures for Red Faction: Armageddon

If you are familiar with Red Faction: Armageddon, why not let others know?

Better than the last outing that had no story which was less entertaining than the recipes on a corn flake box.

Unfortunately I had the first Red Faction game when it was released on PS2 and then some time later the sequel which had some truly AWESOME weapons.. The Geo Mod was bonus.. a way to drill from one tunnel to the next and either find a short cut to a tactical advantage or find some ammo/supplies

Red Faction one didn't really finish so it needed the Sequel.. It was based underground as the surface is in reality deadly.. The dirrection of the 3rd and now the 4th game is so far removed from what the first game was all about. It is another game in every single facet.. Keep the IP for sales purposes is not what gaming should ever be about... The Game (IP) comes first.. sales will come if the Product is as good as it can be and more.

Totally unimpressed at the series and its lake of direction. .. I guess in the Mason clan pointless destructive lives mining on Mars for what? is a genetic flaw.

So glad the IP has been dropped ...

Otherwise this is still fun if you Imagine it as a New IP.. (Mars Wars)..
williamrjun (124) on 08, Jul. 2011 19:55 (HKT)
So much better than the first one
RF Guerrilla was good but this one onwned.
stevenrsvl (354) on 29, Jun. 2011 14:57 (HKT)
Gears, Lost Planet, and Dead Space Mix
Destroy everything will cool weapons.
I good buy to spend time destroying everything on a rainy day!
inaka_rob (196) on 27, Jun. 2011 15:25 (HKT)
REALLY mixed feelings... read below for my reasons
If this game was NOT called Red Faction I would give this game 5 stars. BUT it is a Red Faction game and I want to give it 3, but its fun. First off: this game is super fun no two ways about it!!!
2nd: This is a TERRIBLE Red Faction game. I just wish they called it something else. They added aliens which are a FUN element but STUPID in the Red Faction Universe. Its just cheap and lame to all of sudden have aliens on mars after 3 other games with no aliens on mars. They took out player to player multiplayer which I LOVED in the previous game. This game is linear, not sandbox (like the last game), which I think is also bad thing. the GEOMOD 2.0 engine is amazing. You can destroy everything, but it takes a back seat in this game even the added wrecking crew mode (called Ruin) is only 5 tiny levels that I beat in 10 minutes. For a Red Faction game this has gone in a TERRIBLE direction. If you can get past that, then this game is SUPER FUN!!! most people wont care or notice, but I have been a Red Faction super fan since the very first game on ps2. now we are stuck with aliens in the red faction universe for ever (LAME IMO!) and I want to see the GEOMOD engine become more of a central part or an even bigger mini game much like it was in Red Faction Guerrilla, in that regard they took not 1 but 2 steps back in this game. otherwise this game is super super fun. I just imagine it has a different name when I play it like: "Super Fun Blow (some) Stuff up and Kill Pointless aliens Mediocre Story, no PvP Multiplayer Mars Game"
1 »