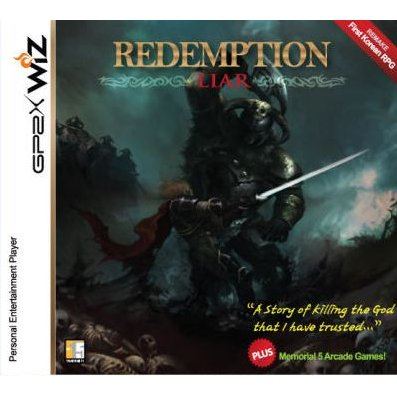 Gamepark Holding
Rated
By Our Customers
Compatible with GP2X™ Wiz

Korea
Get informed when this item is in stock by using our Personal Agent from the right.

sold Out of print / Out of stock.
Manufacturer
Gamepark Holding
Rated By Our Customers
Compatible With GP2X™ Wiz
Version

Korea
Get informed when this item is in stock by using our Personal Agent from the right.
sold Out of print / Out of stock


Click on a thumbnail to see more pictures for Redemption: Liar - Plus Memorial 5 Arcade Games

Form a party of knights and travel to the dark, deep caverns of the underworld. Destroy monsters and level up your characters until you can take down a god.

This is an epic RPG filled with magical items and seemingly impossible tasks. There are more than 200 characters you can recruit into your party and some of the most breathtaking scenarios.

Besides the RPG, the SD card contains 5 other arcade games such as the shooters Truxton, TigerHeli, Slap Fight and Hellfire, and the arcade action Warder. Those who have not had the chance to play these games in the arcade, you can now play then on your GP2X Wiz.

If you are familiar with Redemption: Liar - Plus Memorial 5 Arcade Games, why not let others know?

live_the_life (3) on 17, Jun. 2011 20:51 (HKT)
Terrible Engrish
This is a pretty good game and the storyline is very interesting...or...at least it WOULD be if the translation was even halfway competent. Usually...with a bit of thought and "putting two and two together" you can figure out what is being said...but it always takes some effort. It's so ridiculously bad that it makes a very serious and mature story into a laughable, disjointed mess. It's a shame, too because it seems like it would be a very involving game.

The art direction in the game is great. It's very much on par with what you would find from much larger developers. Unfortunately, the presentation is nearly ruined by a VERY choppy framerate. This is a 100% 2-dimensional game and there is simply no excuse for such piss-poor animation in a 2D game with 16-bit graphics running on modern hardware.

In spite of these handicaps (which are quite severe) the game still manages to be somewhat fun to play thanks to a decent combat system and good dungeon layouts. But these successful ingredients make it all the more disappointing that the graphics engine is so poor and the English translation so terrible. Sigh.

I really want to like this game...and I would if not for the fatal flaws outlined above. I could even live with the choppy animation and poor graphics performance if the English were more intelligible. But the translation is so bad at times that it doesn't even qualify as "Engrish". It's a shame.
k-na. (8) on 24, Oct. 2010 14:38 (HKT)
This is good action RPG.
I am playing the second quest.The movement of the character is felt awkwardly, but graphic and the music are good.
green-one (3) on 10, Aug. 2010 19:41 (HKT)
Redemption - Liar
Because they supported English, contents were easy to read. I am very interesting.
ayubius (2) on 01, Aug. 2010 18:30 (HKT)
I believe that the work of programmers must be justified and so my score 5 points.
If mail is working a little bit on the faster everything would be cool.
Thank you.
celtic_silver_89 (7) on 20, Jul. 2010 13:43 (HKT)
Great Value for Money - But you'll hate it if you dislike Engrish
Firstly I'll start by saying I love this game, especially at the price I got it for. But it likely would have gotten three to four stars if it wasn't for one thing as I have played better action RPGs.

That one thing is the five bonus arcade games. Heavily addictive, they've possibly taken more of my time then Redemption - Liar itself.

If you're thinking about getting this game, I'd say go for it - unless you hate Engrish. Me, I find it hilarious and was in stitches on the box art and manual alone before almost dying of laughter at some points in game. It's terribly entertaining like that.

You know what, I'll even give you the first sentence from the manual: After the dark forces of evil covered the world, some mysterious force as a symbol of balance and power from the ancient time called a hero, and he meets the existence and is invested with the greatest and strongest power after passing through the whirlwind adventure.

You too will meet the existence as an ancient time hero if you play this game!
1 »