No Region Protection / Survival
In stock, usually ships within 24hrs 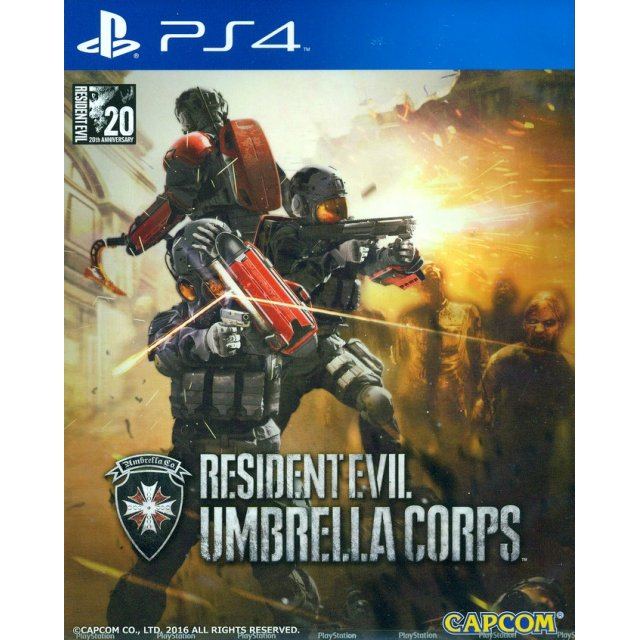 sold Out of print / Out of stock.
Manufacturer
Capcom
Rated By Our Customers
Compatible With PlayStation 4™ (PS4™)
Version

If there's anything that sums up what to expect in Capcom's upcoming 3v3 competitive shooter, Resident Evil Umbrella Corps, it's the prompt you hear in the beginning of a mission:"Objectives Confirmed - Kill anything that moves."

We had a chance to play Umbrella Corps when it premiered at the 2015 Tokyo Game Show, and we can honestly say that it was simply a lot of fun, making it a title we've been personally invested in. Capcom is trying once again, with this action focused spinoff, to create something immediately accessible and intensely fast-paced; with a tight 3v3 setup and a focus on close quarter battle (CQB), the first impression was how much it felt like a real life session of airsoft in a similar scenario. Reactions and tactics have to be executed perfectly through team communication, reflexes, and the ability to take and hold cover points.

It's worth mentioning thought that the similarity between the game and reality end at this impression. In Resident Evil Umbrella Corps, or at least what makes it associated with Resident Evil, are the locations that these matches take place in as well as what inhabits said locations. Players will find themselves in familiar settings such as the first village of Resident Evil 4, or the wartorn shanties of Resident Evil 5, amongst other iconic places; each place has their own iteration of zombies, so for RE4, expect to see the return of Plaga infected Ganados~

The analog cover system is another nice touch. Players can stick to cover with a button press locking them in place, and from there they can manouver within that position - depending on controller trigger presses, more of the player will be revealed, so it's a clever mechanic that forces a dynamic of defense vs offense.

Cover will be destroyed though, and in such close combat orientated maps, staying around for too long in one place will often mean a "YOU DIED" screen prompt, especially if an enemy player sneaks up behind you for a delightful one hit kill called "the brainer," which is exactly what it sounds like. If caught in time though, both players can viscously duel it out.
Finally, another feature unique to Umbrella Corps is how players can interact with Zombies. They can be used against enemies, made into ad-hoc cover, or even as a shield, provided the right equipment is in a player's setup.

Now, with the newest trailer, there's been an additional single player mode with missions and objectives, as well as a horde mode for added challenge. While this is a great addition, we strongly recommend this upcoming title to those who are looking for a game where they just want to team up with friends and play something where the situations in battle change within a blink of an eye - it really is that fast!

If you are familiar with Resident Evil Umbrella Corps (Multi-Language), why not let others know?

A uninteresting game, except for those who love the competitive PvP. The only interest (for collectors) is to be physical version and have any language.
1 »