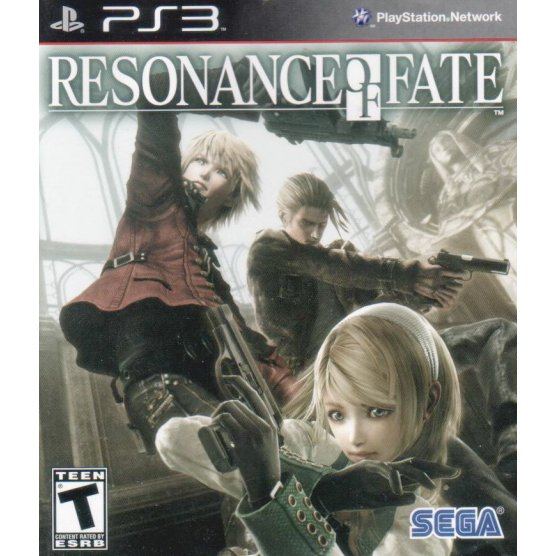 Works on all systems sold worldwide, a correct regional account may be required for online features.
1w Expected stock arrival within 1 week.
US$26.99
Our previous price:US$ 39.99
You save: US$ 13.00( 33% )
Manufacturer
Sega
Rated By Our Customers
1w Expected stock arrival within 1 week
Price
US$26.99
Our previous price:
US$ 39.99
You save:
US$ 13.00( 33% )
Play-Asia.com Return & Refund Policy
Click on a thumbnail to see more pictures for Resonance of Fate

Civilization on earth has long been forgotten with the previously lush world now a burned out remnant of its former self. Originally built as an experimental life support system, Basel is now the only place on Earth where mankind can sustain their lives.As their role their PMF (Private Military Firm) the group (Vasheron, Zephyr and Leanne) must seek out and complete quests for their clients leading them on a journey that will reveal the truth of Basel.Resonance of Fate is developed by the heralded RPG developers, tri-Ace, who have had a hand in developing some of gaming’s most celebrated RPG franchises from Star Ocean to Valkyrie Profile. Sega and Tri-Ace now introduce Resonance of Fate, which adds a new spin to the genre with a new cinematic action gameplay system centred around gun play and a steam punk styled world.

If you are familiar with Resonance of Fate, why not let others know?

Exebiel (29) on 11, Jun. 2015 13:12 (HKT)
Matrix-like RPG with a touch of good comedy & action
The atmosphere of this game reminded me to enjoy an original game style, the conversations (voice acting), BGM and the battle system. It has a unique and simple way to get fun.

Conclusion, this game is a gem.
mivaness (19) on 14, Feb. 2015 15:14 (HKT)
Intriguing gameplay
This game is definitely different. Some people say this game is hard. Well, it is... but if you get a hang of it, it's not. What's hard is getting your characters to level up.

You level up by fighting but it also depends on the level of your guns. So you need to switch guns otherwise it'll be hard for you to level up. You have machine guns and hand guns. You also have grenades and molotovs. The higher the level of your guns, the more recharge ring you'll have which means more bonuses and more multiplied damage you'll give.
There are 3 main characters and you can make them hold any type of guns so you can level up easier.

Aside from the complicated leveling up, you get to enjoy buying clothes for your characters. You can even change their haircolor and eye color. Some items are dropped, found in treasure chest or being sold in the boutique. You unlock more as you progress with the story.

Speaking of story... you start with a scene where you rescue a girl who was trying to ... kill herself. You caught her and the two of you fall down the tall tower that you live on. No explanation as to why she jumped or how you ended up staying together in a more run-down area was given when you wake up to start your game. The story is divided by chapters. But usually each chapter is a conclusion. You get a quest, you go fetch something, you fight a boss, you finish the quest, you end a chapter. There are side-quests you can do within that chapter that you'll lose if you continue the chapter before finishing it.

The artwork looks really cool. You can have all 3 characters walk around the town kind of like rogue galaxy and your costume changes depending on what you make them wear. The color tone is pretty bland though. It doesn't get colorful. At most, you get a golden bright rich looking place.

I don't regret buying this game though. It's a lot of fun to play but you do need a lot of practice to get used to the fighting style. Good thing they have a place for you to practice at.

One thing to remember: save. Save a lot. If you often die, you better save a lot. Otherwise you'll have to pay money to replay a fight if you're afraid of losing the money and exp you've gained. If you think you're gonna fight a boss, save. If you you're moving places, save. This game features no auto-save so you better save.
BreezeSebby (44) on 04, Feb. 2015 13:33 (HKT)
I love this game
so much fun and nice
onkal.cengiz (11) on 06, Jan. 2015 14:05 (HKT)
Güzel
Bu oyun oldukça farklı bir oynanışa sahip. Kesinlikle başka bir bezeri yok ve oynanmadığı sürece anlatıması zor. Alışmak biraz zaman alıyor ama alışınca oldukça tatmin edici bir oyun.
andrecelso06 (24) on 27, Dec. 2014 01:02 (HKT)
Diferente
Jogo de Rpg com um sistema único de batalha, demora um pouco pra aprender, mas nada muito difícil, vale a pena pelo enredo e músicas.
1 »