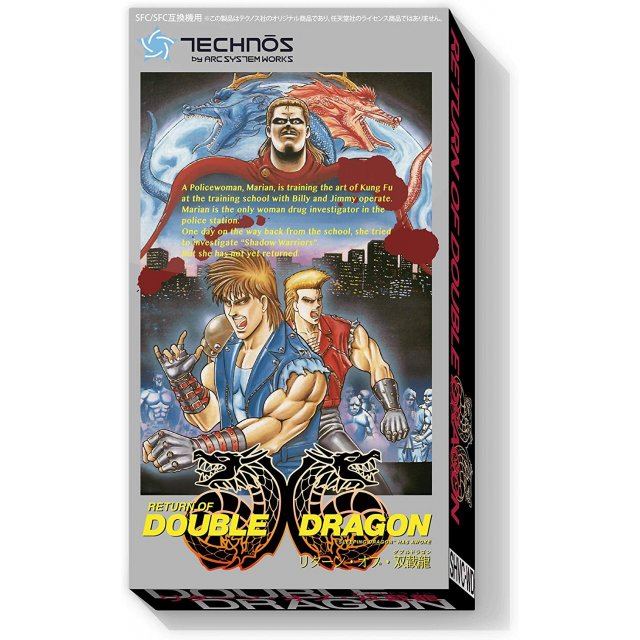 sold Out of print / Out of stock.
Manufacturer
Tommo
Compatible With Super Famicom™ / SNES™ (SNES)
Version

The legendary series was introduced in arcades by Technos Japan in 1987 with the first 16-bit version Return of Double Dragon, originally released in 1992. Billy and Jimmy Lee are young twin brothers who run a martial arts dojo. After their friend Marian disappears, the Lee brothers fight to rescue her. 1 to 2 players control the Lee brothers, masters of the Sousetsuken martial art. A fierce battle with the Shadow Warriors unfolds over 7 stages, including extra stages. In contrast to previous entries and arcade versions, the Lee brothers arsenal of moves has increased dramatically! The player can perform over 30 special moves! Use the “power gauge” to perform powerful techniques and make use of the new defense feature to change the tide of battle. The action has never felt more real! In addition to throwable items such as barrels, stones, knives, bombs, and boomerangs, there are now real martial art weapons such as the nunchaku and staff to wield in battle. There are also split-level terrain features such as stairways, walls, and crates that you can use to gain the advantage in battle!

No reviews for Return of Double Dragon (Replica Package) yet.