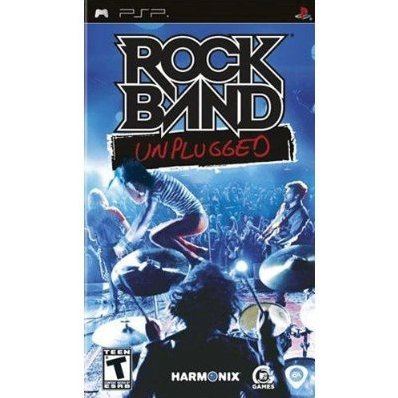 Works on all systems sold worldwide, a correct regional account may be required for online features.
1w Expected stock arrival within 1 week.
US$20.89
Our previous price:US$ 44.90
You save: US$ 24.01( 53% )
Manufacturer
Electronic Arts
Rated By Our Customers
Compatible With Sony PSP™ (PSP™)
Version

Works on all systems sold worldwide, a correct regional account may be required for online features.
1w Expected stock arrival within 1 week
Price
US$20.89
Our previous price:
US$ 44.90
You save:
US$ 24.01( 53% )
Play-Asia.com Return & Refund Policy
Trustpilot
Trustpilot
Click on a thumbnail to see more pictures for Rock Band Unplugged

Based on the award-winning Rock Band series of games, Rock Band Unplugged features 41 songs on-disc that encompass popular tracks from the Rock Band music library, as well as nine songs exclusive to Rock Band Unplugged for a limited time before becoming available as downloadable content on other console versions.

Rock Band Unplugged helps players keep on rocking by delivering the first PSP game to feature an in-game store for downloadable content. Harmonix will stock the music store with 10 tracks at launch, and additional music will be released on a regular basis. PlayStation®Network will power the in-game store, and players can use their existing PlayStation Network accounts to purchase tracks, similar to the Rock Band console experience. PSP system owners will also have the option of purchasing tracks via PlayStation®Store on the PC.

The first 10 DLC tracks that will be available in the Rock Band Unplugged music store starting June 9, 2009 are listed below.

If you are familiar with Rock Band Unplugged, why not let others know?

affiq_arifin (21) on 13, Mar. 2011 00:04 (HKT)
Worth every cents!
If you're looking for a long term game where you can play over and over again, then this particular UMD is the right choice as PSN will always update their list of songs. So, you can't be bored. :)
coldice (266) on 07, Mar. 2010 14:17 (HKT)
Rockband makes its way to PSP
Rhythm games are no strangers to PSP. Taiko no Tatsujin, DJ Max, Gitaroo Man, Pop'n Music - all these games have brought a lot of asian flavours to the genre and Rock band finally bring a different flavour of music to PSP.

Gameplay will be very familiar to anyone who's played any of the games listed above, where you play the notes by pressing corresponding buttons in line with the time.

One thing here is that you don't play just one instrument, but you have to rotate between different instruments. This can be a bit of distraction than innovation to some.

Nevertheless, the game is fun alternative to all other rhythm games on the handheld and PSP's high storage brings it with all nice quality music and sleek visuals.

Good game with it's faults. Not a classic, but a great start on PSP.
asobi-vex (5) on 18, Oct. 2009 09:21 (HKT)
Good for what it is.
I had to pick this up as a Rock Band fan, and it does not disappoint. As a portable edition with no specialized controllers, this still manages to convey the core Rock Band gameplay experience, which is very surprising. My only gripes are the short playlist of 41 songs and the inexplicable timing of its save-data routines. People have pointed out that it should support interoperable DLC with the Playstation 3 version, but honestly with the difference in data structures that would be untenable.
linkherooftime234 (2) on 08, Oct. 2009 06:01 (HKT)
5 Stars
I've never been too fond of music games, plastic guitars dont hold any appeal to me, but this game is better suited to my play style.
Lots of really good songs(like Ace of Spades or ABC),great graphics and the use of everything that makes Rock Band great(minus the nasty plastic instruments)make this one a winner.
And dont forget the headphones.
ory2288 (3) on 04, Oct. 2009 23:53 (HKT)
Portable Fun
Music entertainment on the go. Rhythm, timing, and some headphones and your in the band. Creative play without the use of a peripheral (guitar etc) I'm enjoying the add-on content as well as the pre-installed games.
1 »