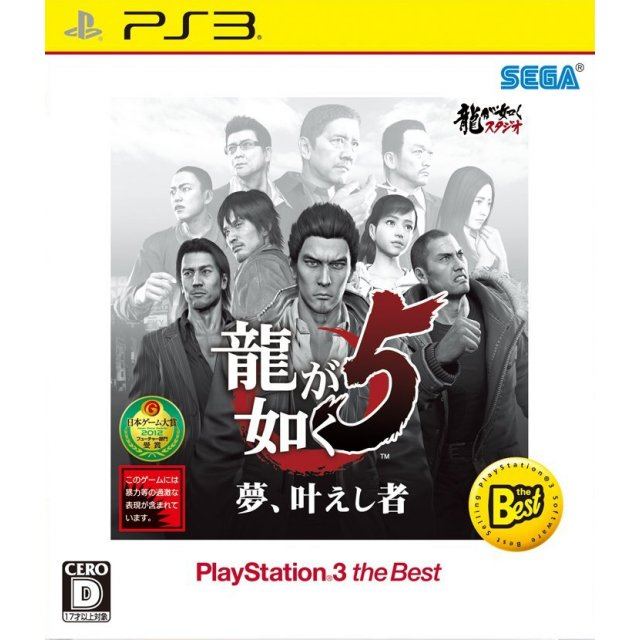 The clash between two big gangs brings the schemes and dark plots within the police force to the surface. And now the fragile peace is only protected through the vows taken between the gangs. However, upon the death of the big boss, everything falls back into chaos, and this time, the violence spreads out from Kamuro-cho, spilling all over Japan. Osaka, Sapporo, Fukuoka, Nagoya and Tokyo are turned into war zones as the gangs seek dominion over one another. The story is told through the POV of five characters. Gamers will see more of Kiryuu and his charge Haruka. New characters include a criminal vying for the spot of a gang boss, a porn writer and a con-man. Everything is heading for a big collision, and there is no way a gamer with ambition can afford to miss this

If you are familiar with Ryu ga Gotoku 5: Yume, Kanaeshi Mono (Playstation 3 the Best), why not let others know?

player_ryo (7) on 05, Nov. 2014 08:50 (HKT)
Kiryu's world bigger then ever!
The game pulls the main character of the series, Kuzuma Kiryu out of the Yakuza, only to be drag in once more because of his previous involvement in past Ryu Ga Gotoku games.

The game is well made. The world which puts each of the characters in is well put together. With Sega's new engine, the world really feels alive from the start of the game, as you process, the presentation really hold up and stay throughout the entire game, thanks to the new engine. They bring out each world the characters can explore.

The game offers a whole bunch of new mini games, which weren't found in the sequels and this starts early on right from the start, so it doesn't disappoint anyone who wants to jump in to see the action.

Being an only Japanese release unlike the Ryu Ga Gotoku games, was the rest of the world ready for Ryu Ga Gotoku 5? It's big scale of the game and many of the themes really challenge if anyone would agree or disagree with Sega's desicion not to release the game in the west. Some of the themes in the game are entertaining but they are not bold, which is why I would see why this game didn't get an English release.

Some people may be put off with the characters as they are a bit predictable, having to work into the game to see the results of each characters outcome however the game has always been around character progression and it has become a grindy and dated. Thankfully the sequel Ryu Ga Gotoku 0 staled for a release in 2015 will fix this but not in this game, which is why I give the game 4 stars.
gaetanvl (1) on 14, Oct. 2014 19:14 (HKT)
perfect
But how not to put the perfect score in this game? Famitsu had to ask the same question (the ones who put him 40/40), and as I understand ... Yakuza 5 deserves to be taken as a model by all developers in the world.

I just finished the script: it took me 105 hours and 39 minutes. Admittedly, I took my time in making a number of side quests along the way, but that's another number that will give you an idea of the length of dizzying life of this title: despite all the quests I have already do, I'm only 14.48% of the total!
It is no exaggeration to say that for anyone who is platinum (I'm planning to aim for that matter) is in hundreds of hours it will take ...

But the key is not there. A period of colossal life has no value if you get bored throughout.
Now it is impossible to get bored in this game so the action is omnipresent and infinite possibilities.

- Diversity in places: 5 real Japanese cities whose downtown has been modeled as it exists in real life, and a whole bunch of other places (a mountain village, a forest, a prison, a landfill, etc.)

- Diversity in the characters (5 playable characters, including a girl, Haruka, which has a chapter that could have been a game in itself)

And that's just a sample of the many things you can do in this game. I tell you, it's dizzying.
But the more enjoyable it is to do all this in real environments. If like me you have had the chance to walk in the downtown Osaka, Nagoya, Tokyo etc ... you walk back into those same streets virtually is just great.

The playable characters are charismatic and hyper hyper endearing, but what is amazing is that even among the NPC, many characters have an incredible care, especially in graphics, since the developers did not hesitate to use much the technique of modeling faces of real people to the faces of the characters in the game (one of the characters, for example the face of Ken Watanabe). This technique allows to give the characters a face and a grain of really hyper-realistic skin. The fact that many of the dialogues are dubbed only enhances immersion, especially when you see the high quality of voice.

The central theme of the game is the pursuit of dreams (this is also the meaning of the title in VO: 「夢, 叶 え し 者」 which means "those who have realized their dreams").
It's mostly from Chapter Haruka that this theme begins to gain momentum, then it has grown more and more ... so admirable. By finishing the game you can understand why the developers have called the game like that. The scenario leads us to reflect deeply on this subject: the different characters often have different philosophies, and their progression in the game on this theme then pushes the player to ask himself questions about it. It's one of the things I liked most in this game, because that's what makes the difference with most conventional action games where you often have a scenario that fits on a post-it and who pass no particular message.

Anyway, I think we can only admire the incredible efforts to made ​​by those developers to be able to execute such a long game, too successful, with few bugs, in summary for me this game is very clearly tHE best game on the PS3 generation, by far.
DarkKnight (21) on 25, Sep. 2014 08:12 (HKT)
Good Game
Another sequel and good game to enjoy. The return character, a recurring character become playable and one additional character for this story game. Dive in the world of two façade between Yakuza and the Mass to understand their point of view.
Gameplay, graphic, control and story script are pretty good. I recommend to fan of the Yakuza (Ryu ga Gotoku) fans.
leandrorizzato (216) on 13, Aug. 2014 05:10 (HKT)
Great Game!!!
More one masterpiece of Yakuza series. Great history, gameplay and graphics. One of the best games of PlayStation 3 for sure!!! I really recommend it for all Yakuza series fans!!!
concon0731 (10) on 06, Jul. 2014 23:12 (HKT)
Great game, Great service
Yakuza 5 is a continuation of the yakuza series. A must buy for Yakuza fans. And play-asia never disappoints with the price and service!
1 »