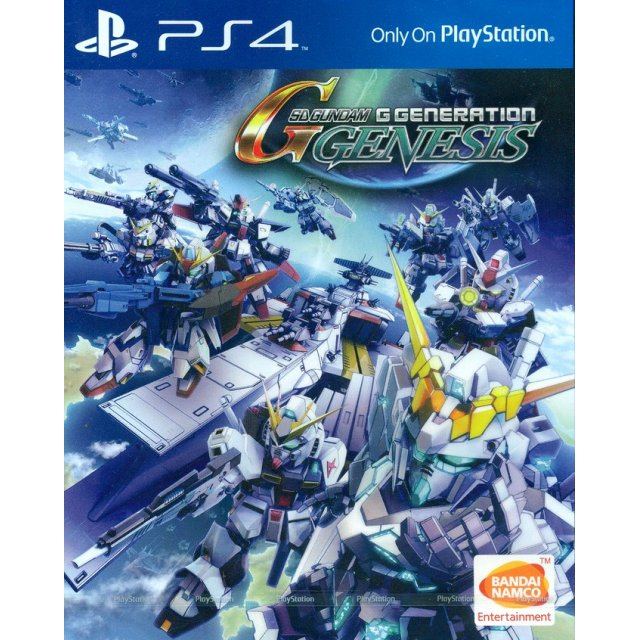 Works on all systems sold worldwide, a correct regional account may be required for online features.
24h In stock, usually ships within 24hrs.
US$37.99
Our previous price:US$ 39.99
You save: US$ 2.00( 5% )
Manufacturer
Bandai Namco Games
Rated By Our Customers
Compatible With PlayStation 4™ (PS4™)
Version

Works on all systems sold worldwide, a correct regional account may be required for online features.
24h In stock, usually ships within 24hrs
Price
US$37.99
Our previous price:
US$ 39.99
You save:
US$ 2.00( 5% )
Play-Asia.com Return & Refund Policy
Click on a thumbnail to see more pictures for SD Gundam G Generation Genesis (English Subs)

rgillespie94 (2) on 08, Dec. 2019 00:35 (HKT)
Absolutely Amazing.
This game is a wonderful must-have for any fans of the Universal Century. If you like Gundam, you'll like this. The game isn't the best starting place for new fans (too many options can be a bad thing), but if you're already a fan, you'll love it.
Kyehlar (1) on 20, Feb. 2019 13:15 (HKT)
Universal Century Saga!!
This is my first SD Gundam/Robot Wars game, and I have been having a blast ever since I started playing. Reliving the events of the Universal Century, revisiting older games in a new way, while also creating your own Mobile Suit collection is an experience I didn't know I needed in my life until I started playing this game. I can't wait for the next game in this series so I can relive the other Gundam Universes!!
deviljustin16 (5) on 31, Jan. 2019 11:25 (HKT)
Im loving this game
My first sd gundam game and i cant stop playing it came on time like always and its amazing
Aamano (1) on 08, Dec. 2018 03:17 (HKT)
Well worth your time
If (like me) you're a fan of Super Robot Wars and/or the newer Gundam Unicorn then this is an excellent strategy game to tide you over, with

It's also a great starting point to see the roots of the series if (also like me) you've never seen or played the older Gundam shows/games in the Universal Century.

Although if you're used to the mechanics in SRW games you might have a little trouble getting used to this game at first.
DualGlint007 (1) on 23, Nov. 2018 14:34 (HKT)
SD Gundam + Universal Century Timeline
What else is there to say? This probably is the most recent and best combination of all of UC timeline's Gundams into one game.
1 »