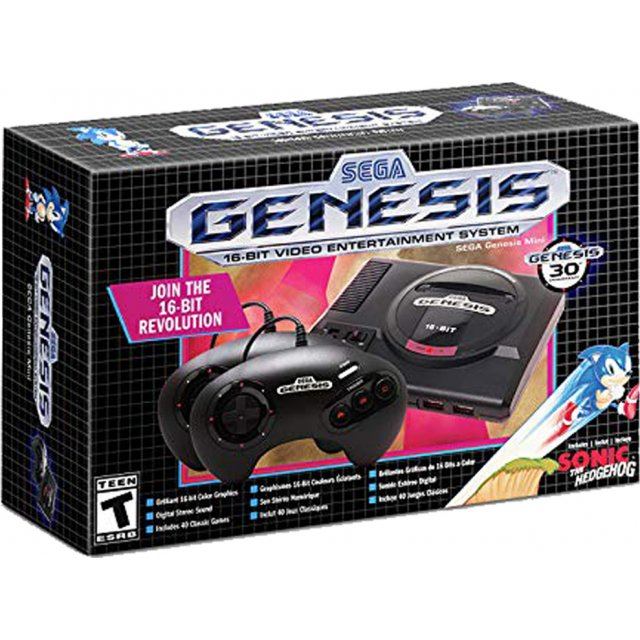 US
24h In stock, usually ships within 24hrs.
US$104.99
Limited time offer - Secure yours now before the offer expires!

Manufacturer
Sega
Rated By Our Customers
24h In stock, usually ships within 24hrs
Price
US$104.99
Our previous price:
US$ 109.99
You save:
US$ 5.00( 5% )
Play-Asia.com Return & Refund Policy
Trustpilot
Trustpilot
Click on a thumbnail to see more pictures for Sega Genesis Mini

Sega's fifth home video game console was born in 1988. It has a popular series of Sonic, Shining series, Phantasy Star and Puyo. In commemoration of about 30 years from the released of it, the new game machine that SEGA passes that has memories of that time and reproduced it in the palm size. The “Sega Genesis Mini" from action to shooting, puzzles, RPG, and simulation, you can enjoy plenty of nostalgic masterpiece titles in history.

If you are familiar with Sega Genesis Mini, why not let others know?

[This review is based on another version of this product]
pop255 (1) on 06, Feb. 2020 14:58 (HKT)
Asia gets best game list of the 3 launched
Has many classics and has most of the most expensive games in cartridge, great job sega!
MSfeller (1) on 21, Dec. 2019 15:48 (HKT)
Sega does what Nintendid - and beyond
Where to start? First, kudos for keeping the scale similar to the Nintendo and Sony consoles beforehand, that means it fits in beautifully with the rest of the collection that many folks like me like to collect. I wish Konami followed suit with their Turbografx-16, which is shockingly massive in size for a mini, but I digress. The selection of games is outstanding, the many customization options are great and I actually like that they included the 3-button controller, as they licensed Retro-bit to make the 6-button, which I bought immediately, so it's great to now have both. And the mini tower, wow, that's just Sega going above and beyond - I just hope that they eventually release the NA version with the Sega CD logo that they sent to big YouTubers to the general public, if not, I'll settle for the Mega CD, which looks fantastic... but a Sega CD one would fit our Genesis version perfectly. In short, thanks to the wise choice to dump AT Games and go with reputable M2, this mini console is all around a labor of love to Sega fans and beyond, as I grew up with Nintendo consoles after the 2600 had come and gone, but can truly appreciate a console that otherwise I just played at a friend's house here and there back in the day.

Also, many thanks for Play Asia once again unlocking the regional barriers for anyone one earth to buy whichever version they want. As an American living in the UK, I have no nostalgia for PAL or the local MD, and this mini lines up perfectly in appearance with the High Definition NTSC Genesis model 1 I have here. Play Asia made it so much easier to get one instead of absurd prices from eBay scalpers. In conclusion, I couldn't be happier to add this mini console to my collection and occasionally glance at its beauty sitting in front of my TV as I write this!
choanikijin (141) on 14, Dec. 2019 17:29 (HKT)
WELCOMETOTHENEXTLEVEL!
WELCOMETOTHENEXTLEVEL!