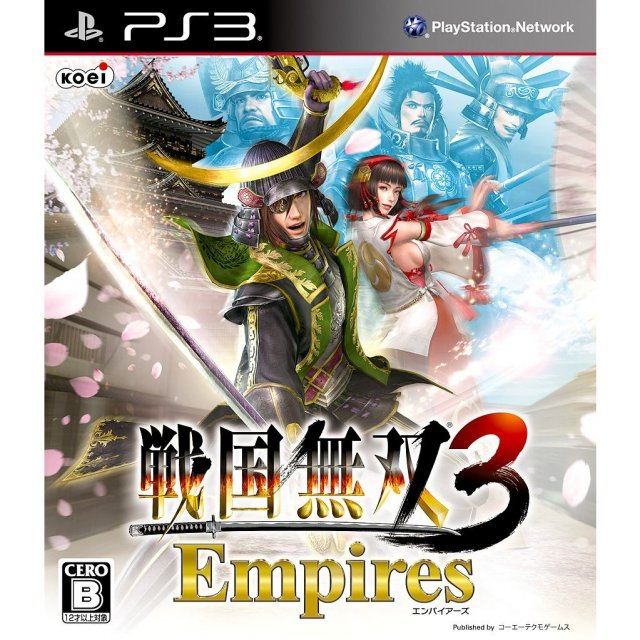 Works on all systems sold worldwide, a correct regional account may be required for online features.
1w Expected stock arrival within 1 week.
US$29.99
Our previous price:US$ 37.99
You save: US$ 8.00( 21% )
Manufacturer
Koei Tecmo Games
Rated By Our Customers
Compatible With PlayStation 3™ (PS3™)
Version

Works on all systems sold worldwide, a correct regional account may be required for online features.
1w Expected stock arrival within 1 week
Price
US$29.99
Our previous price:
US$ 37.99
You save:
US$ 8.00( 21% )
Play-Asia.com Return & Refund Policy

Mow down the armies, take down the fortress and unite chaotic Japan. Sengoku Musou 3 Empires allows gamers to become one of the great daimyos of the era. They will have their land, their citizens and their soldiers. The game combines simulation with battles, giving gamers a most comprehensive warrior lifestyle. What you decide on putting in your city affects your armies. Build facilities in your land for your citizens to make your territory prosper, and invest your money in all sorts of things. Invade the land of other daimyos. The higher the levels their soldiers are at, the more difficult they are to take down, unleash the strategist and the warrior in you to take down the impregnable fortress.

If you are familiar with Sengoku Musou 3 Empires, why not let others know?

Suetsumuhana (1) on 09, Feb. 2012 05:26 (HKT)
not even close to SW2 Empires
It’s the worst Empires game ever... and the Worst Sengoku Musou game though. It’s amazing how they have managed to ruin a good series. Thanks to the absence of the persistent growth and ability to give commands to all allied officers on the battlefield the game play is hellishly boring and repetitive. There are no tactics, no special cards... there is nothing. Instead you have to start each mission being level one. Ridiculous! The allies are weak no matter what and disappear in an instant. The building part seems to be a little bit interesting at first but later you’ll discover that your building affords affect nothing. No matter how many troops you have the enemy will always have much more even if you have all the provinces except one and the enemy has just one province of the entire land. It was total waste of my money. I nearly forced myself to play it just because I’ve paid the money.
rgm_80sp (3) on 21, Dec. 2011 03:06 (HKT)
Don't buy unless you absolutely want it.
The same game returns, wrapped in outdated graphics by Koei to get your money again. Game is same as before, dragged down further by the even worst empire manage mode. The empire mode is similar to 1st generation SimCity, but only in respect of the building part of it. Building serve a particular function, that is about it, no other purpose. The fighting part is even worst, playing more will only prove it is even worst than it is. Gone is the persistent growth featured throughout all other Musou games, replaced by playing from level 1 for EVERY single battle. I suppose this is the only way Omega Force can put any sort of time sink and game play hours into the game. Only persistent growth is through items and weapons. Create a character mode is so severely limited, it is only set up to get more of your money through DLC. Bottom line, don't get this game unless you absolutely want it. Games are getting expensive by the day, compounded by the rising value of yen. Pick your games carefully before you waste your money on a C title.
wm_gg82 (21) on 29, Sep. 2011 16:38 (HKT)
Fun, but may not hold your interest long
As par for the course with Koei, Empires 3 takes a few steps forward in some places and takes a few steps back when compared to Shin Sangoku Musou 5/ Dynasty Warriors 6 Empires. On one hand, designing and building up your home base and figuring out how to best boost your forces adds a welcome bit of strategy to the endless slaughter. On the other hand, if you were hoping you could start out as a ruler or officer or ronin like in SSM5/DW6 Empires, you'll be disappointed. The original character creator is also a bit weaker than in the previous game in that there are fewer choices for voices and the like (for example, you could adjust pitch for voices in SSM5 Empires). Sengoku Musou 3 is fun, make no mistake. It's only problem is it may not hold your attention for very long.
superDioplus (15) on 20, Sep. 2011 08:49 (HKT)
Good but far from excellent
The tactical part of hakoniwa is fancy to look at first, but once you get to know it more, you'll know it's just as simple as Lego bricks, and gets boring pretty quick, plus it does drag the pace of the battle A LOT. You will be spending tons of your time balance the bricks to avoid a tough fight. Also FYI, the AI is far less superior than the original titles, your ally dies pretty quick so you need a plan to work it out. The good parts are, tons of dialogues and interactions for fans of the series to enjoy, the new BGM also features ones from the 3ds title; and a somewhat good story mode (a first in empires games). Recommend for long time fans, new comers beware, this is not your typical hack n slash mindless button masher.
tachihoma (133) on 26, Aug. 2011 08:13 (HKT)
Finally this similar Nobunaga no yabou + musou style game was release.......just a bit upset is the pre-order free DLC can get from PSN in the same day......no point to be a exclusive pre-order DLC.......KOEI = =||