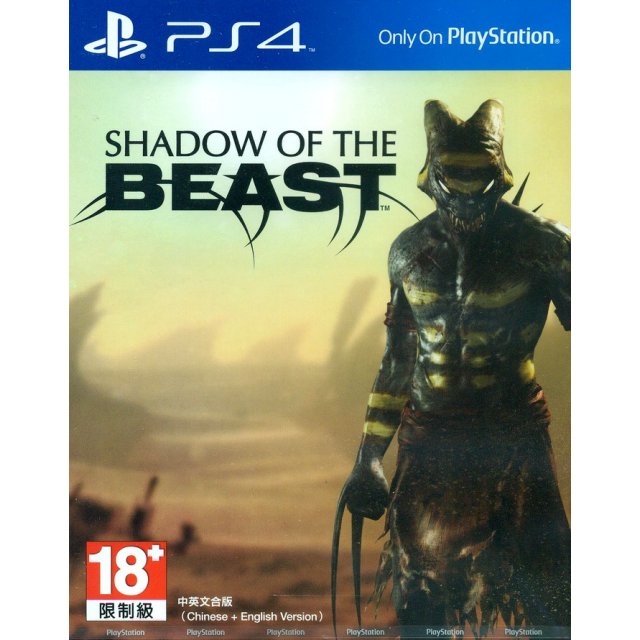 sold Out of print / Out of stock.
Sony Computer Entertainment
Rated By Our Customers
Compatible With PlayStation 4™ (PS4™)
Version

Shadow of the Beast is Sony Interactive Entertainment and Heavy Spectrum's re-imagining of the 1989 side-scrolling classic of the same name, originally released for the Amiga. Notorious for both its difficulty and action, as well as its impressive graphics for the time period, Shadow of the Beast promises to give new players that same experience that inspired many fans of the original. Of course with this being a remake art style, music, and gameplay have all undergone large changes, with the goal of retaining the overall feel of the original.

Without pity; without mercy. Take control of the beast known as Aarbron and unleash an unstoppable tide of brutality on all who stand between you and your vengeance. Players will tear their way through entire armies, exploring ancient lands in search of the evil mage Maletoth. The fighting mechanics will greatly reward timing and precision — which not only ends up being fun to play but also looks amazing when the animations are chained together.

The gameplay mechanics will allow players to draw strength from slaughter, as you spill the blood of armed regiments and monstrous hordes alike to fuel your frenzy and unlock brutal new attacks and takedowns that will have you chasing the highest score.

If you are familiar with Shadow of the Beast (English & Chinese Subs), why not let others know?

Dom (13) on 29, Apr. 2019 09:58 (HKT)
A delightfully brutal revival
This game is Intense for a platformer but so was the original, everything about this game is stunning and the content is highly re-playable
plomi1 (13) on 17, May. 2017 21:08 (HKT)
No title
Bought it last year; thanks for making a physical copy.
I like it quite a lot. My memories went straight back to the early 90s when I used to play it on my Amiga 500.
Gianluca
erbkaiser (22) on 07, May. 2017 23:02 (HKT)
Very average game
Shadow of the Beast looks very nice, but it feels like more could've been done with this game. There is not enough variation to the gameplay to recommend it on gameplay alone. I personally have no memories of the Amiga original so it was a new experience for me, and I was expecting more. It is a good example of a single-A title as opposed to the triple A blockbusters or indie titles that also exist.
lastknight01 (6) on 26, Apr. 2017 21:51 (HKT)
A Classic Reborn
This one started life as an Amiga title. It has returned to the PS4 and luckily in Asia this has a physical version. It follows an alien slave that breaks free and wants revenge. It is a simple story that is told well.

The action could be compared to a rhythm game. You want to find a good pace to your attacks and counters to keep combos going. It is tricky at first but it gets easier. Some bosses are hard but rewarding to defeat.

The graphics look stunning. It is easily the best looking 2-D action game on the PS4. You can even unlock the old game and compare. It is a nice feature that shows you how far games have come.

The music is moody but does not really make an impression. The game also has some annoying levels like one that is in a dark maze filled with spikes that is annoying to navigate. I also wish the game was a little longer. But there is some replay value as you can unlock concept art and movies.