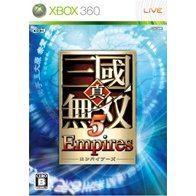 Conquer the Sangoku world the hack and slash way with Sangoku Musou Empires. There are more ways in which you can carry out your conquests in this installment and more warriors to fight. You can be your own warrior. Create your own avatar, with a vast wardrobe, hairstyle and skintone database, you can mix and match features to make your own character, step into his or her shoes and take on all the opposing forces. Train your strategical thinking skills, manage your military tactics and your internal affairs, show that you are a ruler fit to control the chaotic sangoku era.

If you are familiar with Shin Sangoku Musou 5 Empires, why not let others know?

[This review is based on another version of this product]
kagomesweet5 (1) on 04, Aug. 2010 20:00 (HKT)
Majorly Fun
Love the game the costamization alot of costumes n alot of character slots but it sucks that alot of the move sets are the same different weapon yes but same movesets which really stink but overall its a great game and i would recommand it!
[This review is based on another version of this product]
tachihoma (133) on 25, May. 2010 17:33 (HKT)
P3 Ver. Review
much better gameplay than previous version of SSM5 & can simply rule the Sango World with Create Warrior
[This review is based on another version of this product]
MainCompton (184) on 28, Feb. 2010 15:12 (HKT)
details (PS3 Japan Version)
Game is stackable and can attain another Platinum , if you own Dynasty Warriors 6 Empires . Awesome game & love the create a character mode .
[This review is based on another version of this product]
jrius1437 (3) on 20, Sep. 2009 12:08 (HKT)
Tactical Actions in Musou
This is one of the latest Empires in Musou series, both Dynasty and Samurai warriors. One of the best part in this game is, you can create your "own" character using existing character's model!!! Imagine that you created a loli with LuBu's model, incredible!!!!
This is one of the good games recommended to play with!!
[This review is based on another version of this product]
riceblade (1) on 15, Sep. 2009 20:22 (HKT)
Start your new conquest to unify China once again!
This is the 3rd installment of the empires series. In shin sangoku musou 5 empires, you can now choose to be an officer serving under a lord! You can be a loyal officer who advised on your lord's decision or be an unfaithful officer who betray their lord for gold like lu bu! Playing as lord has also given a whole new card system which aids to strategy on recovering your army or making pact with others to protect yourself. The whole new skill system is amazing as well, allowing you to survive on the battlefield easier even for beginners! There is also the ambush system, entering your opponent's base unseen and catch them off guard by setting it on fire! Not only that, in empires 5, you can move in water!! which gives more accessiblity. The "Create-an-offcier" gives much more vairety of editing and theres even DLC for some costumes from their other famous game. The BGMs are superb as well, the DLC also provide some old BGM for you to enjoy!

Although there maybe little event or cutscene, this game is still a great successful empires game. which i reccommend it a must try especially if you are a dynasty warriors fan.
1 »