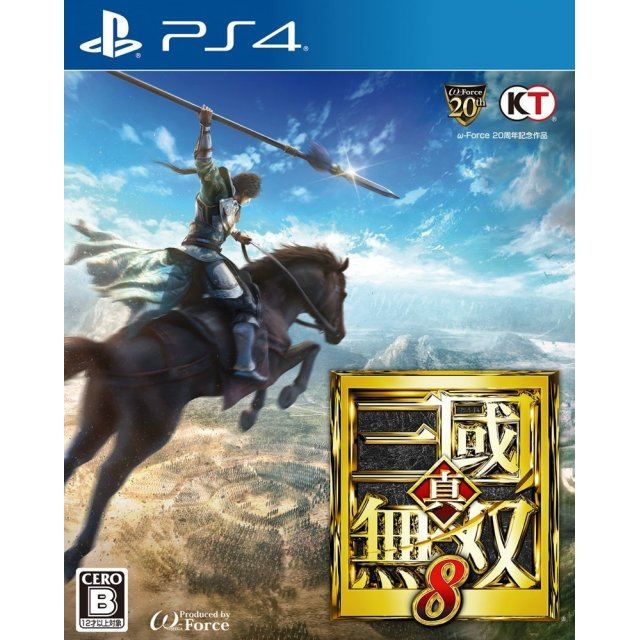 Works on all systems sold worldwide, a correct regional account may be required for online features.
24h In stock, usually ships within 24hrs.
US$68.98
Our previous price:US$ 69.99
You save: US$ 1.01( 1% )
Manufacturer
Koei Tecmo Games
Rated By Our Customers
Compatible With PlayStation 4™ (PS4™)
Version

Works on all systems sold worldwide, a correct regional account may be required for online features.
24h In stock, usually ships within 24hrs
Price
US$68.98
Our previous price:
US$ 69.99
You save:
US$ 1.01( 1% )
Play-Asia.com Return & Refund Policy
Trustpilot
Trustpilot
Click on a thumbnail to see more pictures for Shin Sangoku Musou 8

DYNASTY WARRIORS 9 introduces exhilarating new combat mechanics to the series’ signature “one versus thousands” style gameplay with the State Combo System. This new system allows players to perform 3 different attack styles –Trigger Attacks, Flow Attacks and Finish Attacks– each dealing progressively more damage. Trigger Attacks allow players to create the start of an explosive combo, leading to Flow Attacks, which adapt to the enemy’s current state. Successful combos allow for a Finish Attack to be performed, delivering a final blow that eradicates any foes caught in its path. These new enhancements aim to create a thrilling and fluid experience unlike any previous entry in the franchise.

Unifying the classic, time-tested action iconic to the Warriors series with a variety of new features, characters and content in an expansive open world environment, DYNASTY WARRIORS 9 aims to deliver the most immersive and ambitious DYNASTY WARRIORS experience to date. Platforms, release timing, and more information on the game’s new features, characters, and narrative will be unveiled in the coming months.

If you are familiar with Shin Sangoku Musou 8, why not let others know?

[This review is based on another version of this product]
LIOPALDON (41) on 29, May. 2019 09:37 (HKT)
ESTIVAL VERSUS PS4 B3ST UP
I would like left behind the psv / ps4 union games for make ps4 games only . This is good for graphics but bad for psv portable gameplay.
[This review is based on another version of this product]
bertodecosta (41) on 08, Jan. 2019 16:19 (HKT)
Cool cover artwork & manual booklet.
This game showed its age since it's just an official rerelease of a localization of a 1990 game titled Yang Jia Jiang: Yang Warrior Family. Still this game is playable as a beat em up game and it has cool cover artwork & manual booklet.
by9008889 (1) on 28, Aug. 2018 11:46 (HKT)
Not that great IMO but playable...
Though it is interesting to see Koei trying new things in this franchise, it falls pretty flat. Since there would be times where I would be too bored to continue playing where I would take long breaks before I continue.
tachihoma (133) on 18, Feb. 2018 00:30 (HKT)
Good open world game in musou series!!!
It a first time u can play musou series under open world mode with 90 characters.
[This review is based on another version of this product]
pauloredline (169) on 07, Jun. 2017 09:54 (HKT)
Superb!!
One of Best Games for PS VITA. Senran Kagura rules!!!
1 »