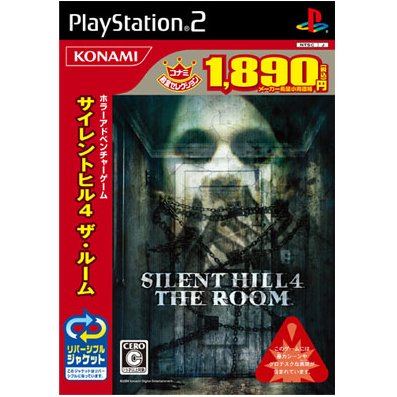 sold Out of print / Out of stock.
Manufacturer
Konami
Compatible With PlayStation 2™ (PS2™)
Version


Click on a thumbnail to see more pictures for Silent Hill 4: The Room (Konami the Best)

Henry Townshend finds himself trapped in his apartment that has been cursed by a deeply rooted evil. Only by exploring mysterious portals leading to disturbing alternate worlds will Henry begin to uncover the truth. However, in true Silent Hill fashion, mysterious new characters, horrendous creatures, and the undead will use any means necessary to impede his progress. Silent Hill 4: The Room features a terrifying experience that fans and newcomers will never forget.

Castlevania: Curse of Darkness / Akumajo Dracula: Yami no Juin (Konami the Best)
US$ 54.99

If you are familiar with Silent Hill 4: The Room (Konami the Best), why not let others know?

nebanks (12) on 18, Jul. 2011 03:29 (HKT)
Different and Brilliant
Although a superficial departure from SH1-3, leaving the namesake town behind, SH4 displays the unmistakably rich storyline, atmosphere and audiovisual style that earned this series its devoted fanbase. Like every KCET SH game, it has its minor gameplay flaws, but like them it is also a thoroughly surreal, absorbing experience that encourages thought and revisiting.
alastor.akira (2) on 18, Jul. 2010 10:22 (HKT)
An underrated gem
This game is often looked as an inferior entry in the classic horror series Silent Hill.

Well, it is true that this game changed a lot of stuff and removed some staples of the series such as the flashlight and the radio. But I think that makes this game refreshing, while making a great experience nonetheless.
It has a twisting plot which makes you guess what will happen next, and the combat system was clearly improved.
It isn't as scary as its predecesors, but still has some moments that make you jump of the chair, and its atmosphere is great.
There are a handful of endings (although it lacks a classic ending of the series) and unlockables (both modes and weapons/costumes), so it has also a great replay value.

All in all, a game that is very underrated just because SH1-3 were more awesome, but that doesn't make this game any bad; indeed, this game is just as funny to play as any other entry in the series.
e_pedraza_g (517) on 23, Mar. 2010 07:38 (HKT)
Such a great horror game
This game is so great I ordered it on PS2 even though I already owned the xbox version :D

While it deviates somewhat from previous Silent Hill conventions, it still conserves what is great about SH, such as psychological thrills, unlike that recent pile of crap attempting to pass for a SH1 remake, called Shattered Memories...